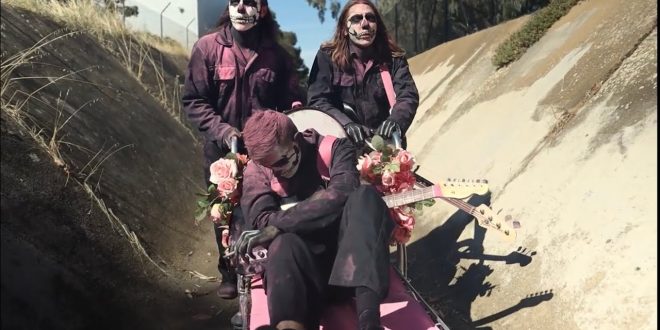 We would classify our music as a rollercoaster of emotions! Heartache, joy, euphoria, the lot! In short Nocturnal Animals are like a Cornetto…. No boring bits.

We want fans to have an experience with the music they can relate to, our favourite bands all made us feel like we belong so we hope people feel the same with our music, listening to it over and over again!

The music scene in Adelaide is awesome! The bands here are world class, slowly the rest of Australia and the world are finding out, Adelaide is like a diamond in the rough. We are blessed to play alongside the bands in Adelaide.

From the womb! When as a band your issue is the fact you always have new songs to work on you just know music is in your bones.

Dyl – Biffy Clyro at Soundwave in I think 2014! Amazing! First time they had been in Australia, Simon walks out on stage holding his hand out….. the guitar tech throws his Stratocaster to him….. He catches it and goes straight into “Stingin’ Belle…. So good.

Bamm – My first concert ever was in 2007 for My Chemical Romances ‘The Black Parade is Dead!’ Tour. To see them live at 13 years old, arguably seeing them in their prime was a thing of beauty. The darkness, the sound, the energy and the aesthetic were something that won’t be captured again in my eyes. The only way I can capture that moment again is to put on the skeleton make up and do it just like the gods from My Chemical Romance, Nocturnal Animals style.

Stu- Violent Soho (2012’ish) At Adelaide UniBar, before the band even walked out the mosh was going off, a kid’s foot went into the roof! Madness!

Out of the releases so far…. The newest single ‘LHW’ its short, snappy and full of energy whilst still telling a story. It’s what we aim to do! We guarantee that listening to this song will make your head bang. Don’t believe us? We love being proven wrong! Listen now!

We are developing constantly; we swap instruments on stage which keeps it fresh! As a band that opens up what we can do creatively too. It’s fun for us and for the crowd! We spend more time with each other than we do with our families. All 3 of us skeleton boys are becoming one synced mind. Our wavelengths on creating songs and performing the songs just gets better, faster, and stronger as time goes by. We are climbing the ladder together and all we see is going to the top with our formula right now.

Meet – Johnny Cash…. The story that dude would have told!

Co-Write a song – Kurt Cobain, how cool to watch that guy create music

New music video for our latest single “LHW” which people can see on YouTube! Search Nocturnal Animals LHW. You want to see a unique music video that’s never been done before? Check out ‘LHW’. If you can find a music video that’s just like ours then let us know and send a message to us via Instagram @_nocturnalanimals_ because we can’t find any music videos like ours!

We’re also recording an album D.I.Y style so that’s a point of focus. Of course, with that, the world!!!!!