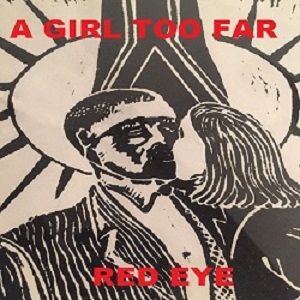 “A Girl Too Far” is the new track from Spain’s Red Eye. Guest vocalist, England’s Dennis Demille conveys the audacious and brilliant words over James Bond-inspired music. Though revered for often releasing songs rooted in raw social, emotional and political issues, Trevor Perfect, the man behind Red Eye, sends a different type of message in his latest piece. The message in Red Eye? Men of the world beware – this girl can really cause some damage.

Red Eye, who’s song “Moroccan Fruit” has just been awarded runner up to ‘song of the decade’ by radio station Severn FM, and who’s song “Little England” was named No. 5 of the 40 Top Brexit Songs ever released by the radio podcast Sixteen Million Rising, is on a roll with his unmistakable talent. It’s also worth checking out the 2019 track, “Get Up and Fight”. But that’s for another story. Red Eye’s long discography list has many deserving songs.

Conspiring with Demille, from Britain’s Got Talent, garners extra rewards as Demille’s vocal demeanor is nothing short of fantastic. When he sings the chorus oh you are, a girl too far, and later but a woman, so near, he sounds like a cross between a devilishly clever narrator and a savior. He’s not the bad guy, though his starkly deep voice would have you think otherwise, he’s the guy giving his advice. Hand to eye, then scream to sigh, she files her nails, watching you die, he sings, unlocking yet another clue that this damsel is not in distress. Sending shivers up and down the spine, Demille’s crooning is frighteningly irresistible. I almost became addicted to the tenor in his voice, that brooding figure a la Vincent Price or an owly Frank Sinatra. What strange world is this outcast of a woman based in? Where did she originate? Why is she like this? One will never know from the lyrics, but it’s untamed protagonist needs a sequel. That’s for sure. I’d love to hear her side of the story. For now, though, Demille’s biting presentation is considerably more entertaining.

It doesn’t have the ding-ding-dah-ling guitar so synonymous with the Bond film score, but this song does have some riveting riffs, and a stylish, updated canvas. Broad strokes are taken by Red Eye, but the final picture is rich in satisfying atmospheric ingredients. As a listener, you don’t feel tethered to any of the original Bond moments, and Red Eye takes you on a completely different sonic pathway. The song’s music bed is robust, and has slight industrial tendencies. But it’s Demille’s daunting vocals that succeeds most. He’s so precise with his pitch and vibe. Red Eye somehow conspires the listener to suspend all and glue themselves to their imagination and this figurative girl that is later a woman. The listener is left with an unforgettable adrenaline rush. Even if you’re not an international man of mystery, “A Girl Too Far” is far too tempting. Be ready to be seduced by Red Eye and Demille’s tune.