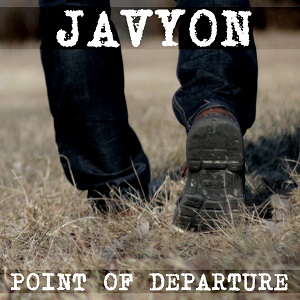 Making a debut album is harder than making any other record, mostly because the task of establishing yourself within a well-known scene or genre can seem next to impossible in this modern, post-millennial era. Even with this being the case, there’s swagger to the performance we get from aspiring rockstar Javyon in his rookie LP Point of Departure that is anything but commonplace in heavy music, no matter the era in question. He approaches his first official album with a lot of confidence, and as a result produces ten different tracks that could each serve as solid lead singles in their own right.

There’s no pretentiousness behind the string play in “On the Way Down,” “The Reckoning Day,” “Overcome Now” or “Twisted Plot;” on the contrary, you can’t really go anywhere in Point of Departure’s tracklist without encountering some form of humbleness in the tone and stylization of the music. Javyon is consistently coming off as someone who isn’t trying to prove anything to us so much as he’s trying to get things off of his chest in this record, and in my book, that makes him a lot more self-aware a player than he has to be (in the best way possible, mind you).

I tuned-in to the exposed lyricism in “Dust,” “With Me,” “The Reckoning Day” and “Outside the Room” right out of the box with Point of Departure, and if you’re as much a fan of powerful rock balladry as I am, I think you’re going to really enjoy the acoustic material here even more than the electric stuff in certain ways. There’s so much evidence to support the notion of Javyon not being afraid to bear everything to us if it means advancing a narrative that is personal and true to the audience, and that’s quite the quality for any songwriter to have.

The flow to this tracklist is really incredible, and while there isn’t any specific progressive element of conceptual framework to the design of the album, it instead feels like a fun mixtape that you can’t put down once you’ve picked it up for the first time. It can be said that Javyon wears his grunge influences on his sleeve in this debut, but unlike the Big Four in AiC, Nirvana, Pearl Jam and Soundgarden, his work sounds a lot more in line with the freewheeling energy of Gruntruck, Love Battery and even Mark Pickerel’s Truly project, each of which traded off commercial accessibility for harmonies of a more human strain.

Rock fans are guaranteed to find plenty to revel in when listening to Javyon’s Point of Departure this September, and with any luck, this LP will be only the first of many hot heavy albums to land on record store shelves as the summer turns to autumn. I’m just getting into this artist’s music, but for what it represents in comparison to some of the other talent rising to the surface in 2020, I don’t think he’s going to face much of a struggle in connecting with listeners around the globe.