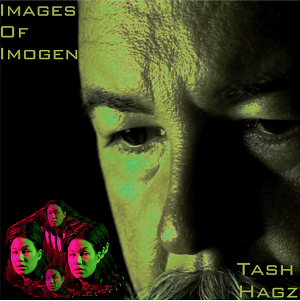 “Images Of Imogen” by Tash Hagz

The name Tash Hagz might sound like a gunfighter from the west, but it’s really just a twist on symbolism for the performance name of Mike Shields. The symbols that annoy are sometimes the symbols people enjoy and the same in reverse, so if you get it then you’ll like the “Images Of Imogen” without any fuss and bother. The experiences of Shields are what make up his music and he’s got his own studio where this was recorded, in Birmingham, England. It took me back to the good times to picture frames and visions to place and replace within them.

If you read into the words you can understand the meaning, or you can add your own meaning and that bodes well in the construction of any good song, which Shields is a veteran at writing. This seems to be a case of an artists’ work finally catching up with them and putting it out there, because until now, he’s been a ghost to me. It’s always good to hear something from across the pond and want to hear more, so that is why playlists are handy in the new digital age. All it takes is subscribing to the channels and you’ll hear the next album or single release.

No telling from where it comes but Shields has the both the modern and classic mojo that missing in today’s indie rock and this also isn’t just average folk, it’s rooted in the right forest to be mingling with its pop counterpart. The mixture of alternative rock, indie folk and pop are what help make this song so special. You can blend a lot of genres together and it goes nowhere, or it carries a tune a long way and somehow keeps it there, where it should be if music is important to you.

Shields has a distinctive voice that almost takes your attention away from the rest of the music, but if you listen closely enough times, you’ll find this song to be undeniably awesome. In fact, before the first listen was over, I was hooked and can’t see how anyone wouldn’t be. The right volume and usually the right equipment helps, but this would still be good if it were played through a transistor radio. It doesn’t really require high quality audio, and that’s all I mean because the quality of this song is satisfying at any volume.

Access to a YouTube link also allowed me to watch and see Tash Hagz in action for himself, and it’s a vintage style featurette with a studio performance around some photo depicted scenes. It’s very cool to watch and hear Hagz do his thing while his voice carries you way, so the effect is enormous and it wouldn’t be the same without seeing him. It’s what this video is best for when it comes to watching music, because he took the time to produce something worth keeping your eyes busy too. Kudos to “Images Of Imogen” and Tash Hagz, the masked man in front of Mike Shields.