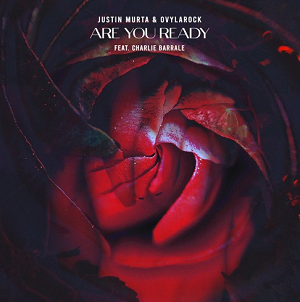 “Are You Ready” (Single) by Justin Murta feat. Charlie Barrale and Ovylarock

Amping up the energy and spinning the grooves like a whip about to crack, “Are You Ready” is the new single from Seattle’s Justin Murta. The popular MC and DJ, who’s presence in Asia grows by the hour, enlists the help of Charlie Barrale and Ovylarock for his latest, hooky single. Asking the listener to open their mind and their hearts, “Are You Ready” is a surefire summer hit.

From his album, Fairytale,  Murta’s gripping music bed in “Are You Ready” starts out with a sultry acoustic guitar arrangement. Within seconds, the electrical pulses unleash and affix to the Flamenco-like guitar chords. Evoking “Bailamos” from Enrique Iglesias and “La Isla Bonita” from Madonna in the guitar work, Murta perfectly pairs the vocals with a rich blend of music movement. The listener is swayed to the rhythms and falls prey to the intoxicating blend of modern electronica and jumpy drum beats. Murta, who in 2013 as a member of the hip hop group The Rebelz took home the Seattle Emerging Artist Award, moves the field posts forward with a celebrated music bed. It’s a lively breed of fiery reds and waves of oceanic blues. The soul of “Are You Ready” doesn’t come across as the Seattle-sound. It has a very West Coast sheen to it, but more Los Angeles than Seattle.

While it makes several appearances, the primary source of entertainment in “Are You Ready” isn’t the moving guitar. Rather, it’s the lyrical content. After a few listens, you start to unfold a story of two young lovers, who have learned from their mistakes. They have learned to be apart, but they have also learned that it’s better to not be a castaway or alone, but to be together. We only have us….so are you ready, I said are you ready open your eyes, a male voice sings. His voice is charismatic. He’s smooth and the music bed underneath his words flows with the same ferocity as a busy freeway at nightfall. It’s time to take control of our lives, he sings, the beats and sounds hit like a xylophone. As we walk with each other, and all the stars in the sky so clear, he sings. Then, just a few more words more and it ends. I think the more I listened to this song the more I think it really represents a jumping-off-the-cliff moment. I think they are ready to be intimate with each other. This is the buildup, the foreplay. He wants the person he’s singing to, who he is back together with, to really take it to the next level this time. It’s their chance to ignore what other people were saying and do what is best for them.

The song is pretty quick – clocking-in just over two-and-a-half minutes. It gets the job done and leaves the listener wanting more. I can easily imagine lots of people hitting repeat after just one listen. “Are You Ready” is a sultry, hit with dropped beats and tantalizing vibes. High marks indeed for Justin Murta.

The music of Justin Murta has been heard all over the world in partnership with the radio plugging services offered by Musik and Film Radio Promotions Division.  Learn more https://musikandfilm.com