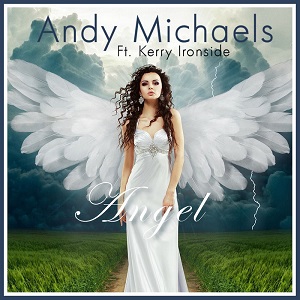 The continued fascination with angels comes to song in Australian singer/songwriter Andy Michaels’ “Angel”. Featuring Kerry Ironside on vocals, and a magnetic backing choir, “Angel” things keep looking up for the prolific Michaels. While he may not share his voice on “Angel” his lyrics are heard loud and clear. Angels are all around us, and having faith in someone is like having an angel by your side.

Weathering a storm is nothing new to Michaels. At age 18, he was involved in a car accident. While he recovered, he learned to play guitar, and put pen to paper and started writing poetry and songs. The majority of Michaels’ songs are about love, hope, positivity and more. “Angel” is clearly about the power of love and dripping with elation. The music base features an acoustic guitar, strumming almost harp-like, but misty like a morning dew. The guitar dances like a field of flowers, all blooming at the same time. The moving tide, a breath of fresh air from keys, strings and the backing choir is, lack for a better term, angelic. One doesn’t need the sound of pounding drums or percussion, with the heart of the song’s rhythm is in the audacious choir.

Michaels’ voice in previous tracks like “Darling It Hurts” and “Fireflies” (from his Incendiary Heart) sounds like Jason Mraz and Bryan Adams got together. But Ironside takes the mic in “Angel” and her vocals prevail in lines such as I can’t wait for you to fly to me, you’ll fly to me, come my angel, my little angel, let your love shine for everyone to see, ah yes, they’ll see. She sings with compassion and devotion. Ironside’s is ensconced in the music, she’s one with the backing music. She progressively radiates. Her voice is a mix of rock and roll soul and folk. Dabbling in more rock than New Age music, Ironside brings a genuine vulnerability. She feels so close and intimate to the subject. Re-imagining this song with any other singer just doesn’t fit the narrative. Ironside gives the song a mature vibe. The term grandparents in the year 2020 means something different than it did in 1990; as grandparents have played a more active role in their grandchildren’s lives, this song struck me as a tune a grandparent might sing to their grandchild. It crosses genres, generations and genders. “Angel” is all loving and all accepting.

I can surmise, though, that Michaels’ might have written this with another angel in mind – maybe someone he lost recently. I didn’t find any inkling of sorrow. His cup runneth over with love. I would say the highlight to “Angel” is the lyrics, but Ironside’s revealing voice comes in a close second. Ironside is a trusty friend, singing her heart out. With so much chaos and stress spinning around our daily lives, this song center’s the listener and provides a calming peace. Look for them, the angel and hopefully angels in your life. Songwriter Andy Michaels’ new song “Angel” is the perfect starting point.

The music of Andy Michaels has been heard all over the world in partnership with the radio plugging services offered by Musik and Film Radio Promotions Division.  Learn more https://musikandfilm.com