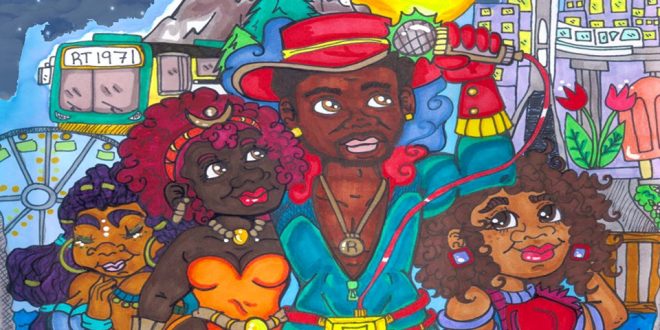 Atop a piano’s sexy chime and a bassline’s weighty sway, Ronnue and Figuz deliver a party-starting powerhouse in the song “Why,” one of the twelve tracks that you’ll find in the former’s new full-length studio album, Introduction 2 Retro-Funk. Released this summer to a warm reception from both fans and critics, Introduction 2 Retro-Funk is defined by songs like “Why,” which melds together funk, hip-hop, soul, R&B and even a little bit of rock tenaciousness in a sultry cocktail that is as surreal as it is thought-provoking around every turn. If it’s hard funk that you came searching for in this disc, look no further than the agile “If We Stayed 2gether” to get all of your wishes granted inside of three and a half minutes. Melodic urban pop with a fat bottom-end tonality? Check out the sleeper hit single “Be Your Freak.” Maybe something a little slower? Smoky vocal virtuosities are in abundance on the second-act star “I’m a Lesbian.” The bottom line is that everywhere we look in Introduction 2 Retro-Funk, we discover a litany of lyrical treasures and heavenly harmonies that seem heaven-sent in a year like 2019.

I first got into Ronnue because of the single “Something About U (The Retro-Funk Mix),” which garnered a lot of adulation from Seattle-area critics earlier this year (and for good reason). As it appears on Introduction 2 Retro-Funk, it’s an irreplaceable staple of the tracklist. Situated between the hybrid “Why” and the stony romancer “In Love,” “Something About U (The Retro-Funk Mix)” turns all of our attention to the relationship between Ronnue and the music cushioning his every utterance. He’s so in-tune with the melody here, so completely removed from the very notion of hesitance in his execution, that it’s difficult to understand how he’s remained but a mere underground sensation these last couple of years. “In Love” is similarly engrossing, and features a synthetic harmony that, oddly enough, reminded me more of the dreaminess of post-punk than it did the decadent synths of, say, early 90’s G-funk (which undoubtedly influenced Ronnue’s approach in the making of this album). “You Tried Me (The Man’s Anthem)” is a little less eclectic compositionally, and along with the supple “Give in 2 Me,” rounds out Introduction 2 Retro-Funk on a very cinematic note.

“17 Days (The Hood Mix)” and “Do It (The Remix) [feat. Roc Phizzle, Soultry]” could both make for strong singles, and the first time that I sat down with this LP, I found “Do It” to be the most interesting of all the tracks here. Ronnue is a great collaborator, and I would love to hear him work with Roc Phizzle and Soultry again in the future (perhaps even in the capacity of an extended play or a live mixtape). All in all, Introduction 2 Retro-Funk is an exquisite addition to an already thrilling discography for Ronnue, and it’s my opinion that this record has all of the necessary pieces to bring its featured artist’s sound into the limelight of the primetime stage. This is a critical moment for the R&B genre, and I believe that it will be musicians like this one who end up bringing it into the future the right way.

The music of RONNUE has been heard all over the world due to the radio plugging services offered by Musik and Film Records. Learn more – https://musikandfilm.com