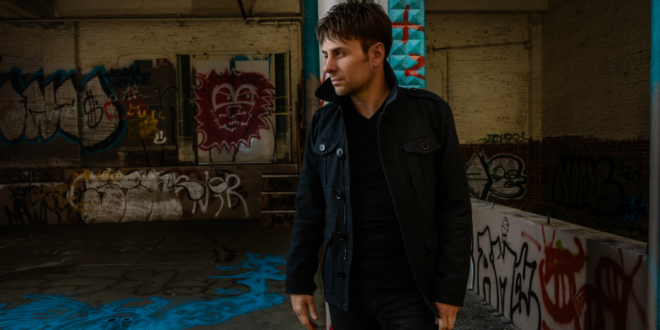 Instrumentally speaking, what Jerad Finck has assembled in his new single “Home” is perhaps his most evocative song so far, but as gripping a musicality as it boasts, that’s not the main reason why I found myself as attracted to it as I did recently. Despite its stationary title, “Home” is a song that is always in motion from the jump; the groove in the drums is constantly shifting gears, the bass reforms to meet the melancholic tone of the vocal, and the synths that frame the melody in the verses ebb and flow like the ocean tide on a deserted beach.

Finck gets as vulnerable as he ever has with us in the lyrics here, and the elegiac nature of the bassline reflects the subtle nuances of pain, fear and lust within the content of his words. The synthesizer has got a lot of energy in this track, but it’s contained by the even distribution of the harmonies in the vocal. The way that the song is mixed, we’re never overwhelmed by the enormity of any one element over another, as all of the big guns in “Home” are stylized around a minimalist-influenced model. It’s not the only single of its kind, but it’s one of the more daring examples of posh postmodernism in all of Finck’s discography.

The groove in this track is really danceable, but I don’t know that I would call “Home” a flat-out club song. The beats are big but lack a certain grandiosity that has become standard in EDM and more aggressive R&B that’s exclusively geared towards DJ’s, but at the same time it’s hard to resist the urge to bust a move to the rhythm of the song when we’re in the heat of the chorus and the only thing stopping the instrumentation from exploding through the speakers is Finck’s commanding croon.

One issue that I do have with the master mix is in the muscularity of the bassline. Though the bass is the essence of the rhythm here, it doesn’t get as much of the volume that I would expect it to. It’s not altogether a negative thing, mostly because the sweet soulfulness of the vocal makes up for any inadequacies that the backing track might have, and overall I can see where Finck might have wanted to avoid too powerful of a bassline in an effort to preserve the natural tonality in his voice, which is one of the most stunning features in “Home.”

If you’ve never heard the music of Jerad Finck prior to now, I can recommend “Home” as a good starting point in getting to know the man, the music and the masterful artistry behind the moniker. He’s getting a lot more comfortable with experimenting here, and from what I can tell in his last few singles, becoming much more fluid in his singing style (not that he was ever failing in that department). The future looks bright for this budding star, and hopefully it won’t be too long before he treats us to another full length album to follow 2012’s Stuck in Your Riddle.