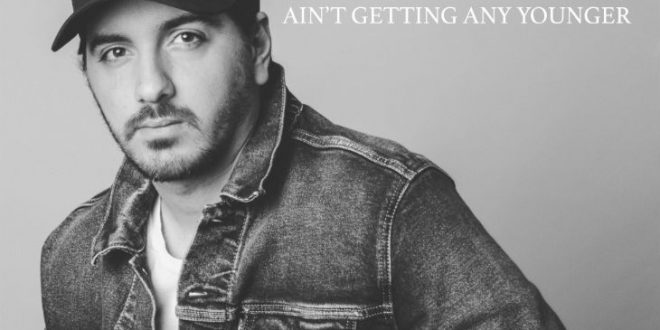 From the moment that his honeysweet lead vocal enters focus at the fifteen second mark of “Ain’t Getting Any Younger,” the passion in country singer Chris Douglas’ voice is simply off the charts awesome. “Ain’t Getting Any Younger” is the official debut from the up and coming country-rock singer/songwriter, but if you’d told me that it was a single from a seasoned studio veteran, I might have believed you solely on the strength of Douglas’ unvarnished adrenaline here. He demonstrates a skillset that isn’t as common as it once was in the country music community, and through his powerful poetry and righteous riff-rocking swing, he offers a little bit of hope to an audience that has grown disillusioned with the status quo of modern Nashville.

This bassline is somewhat muted, but the muscularity in the guitar’s melody compensates for the lack of tonality in the bottom-end. One of the benefits that “Ain’t Getting Any Younger” enjoys in having a limited bass is that it allows for all of our focus to be turned towards the vibrant vocal that Douglas dispatches with the sort of ease that was a trademark among some of his biggest influences. The guitars have enough weight to balance out any lack of depth anywhere else, but by and large, this is a well-rounded piece of music that isn’t devoid of instrumental texture in the least. Every element that is present here adds to the evocative nature of the music, which is something that I would like to see Douglas’ contemporaries in and out of the country genre try to replicate in their own work sometime.

The percussion that forms the backing beat for Chris Douglas’ magnetizing serenade has just as much detail to it as the guitar parts do, and I would even go as far as to say that they’re responsible for more than most of the hard rocking tenacity that this track has from start to finish. They provide the quintessential boost in momentum for Douglas’ illustrious vocal in the chorus, and kick off the song with an epic throttling that is hard to get out of your head once you’ve been exposed to it for the first time. This is one heck of a multilayered debut, and better yet, it doesn’t sound or feel the slightest bit complicated or overindulgent.

Country fans who want to add a little bit of pizazz to their summer party soundtrack would be really wise to see what they think for themselves about this fascinating upstart singer’s virgin single. Not only does Chris Douglas act the part of a contemporary superstar, but he genuinely has an “it” factor in his lyrical execution that makes him sound perfect for this chapter in country music history. The mainstream might have let us down in the last few years, but deep within the underground, artists like Douglas are starting a really hot trend in this genre that I believe will bring a much more diverse audience to their legendary scene, and moreover, the songwriters bringing it back to life. If “Ain’t Getting Any Younger” is a statement song, then to say that I’m very eager to hear whatever comes next might be the biggest understatement of the season.