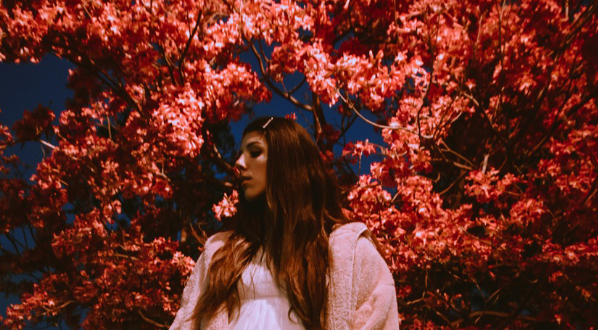 Giadora’s singing talents draw from a deep well of influences. She cites Etta James, Ella Fitzgerald, Blink-182, and Amy Winehouse, among others, as performers who shaped the way she approaches her craft. It is an eclectic array of measuring sticks. I enjoy the mix of gentleness and gravitas in her voice. She never sounds affected and, instead, delivers the song in a natural style that never flirts with disbelief. Dance tracks are often carried by their beat and frequently serviceable vocals, but Giadora breaks that mold with the soulful tenderness she fills this song with. Her voice has a warm texture that shows why she’s landed prime spots on some of the Los Angeles area’s hottest venues like Kulak’s Woodshed, the Black Rose Tavern, and Room5. There’s nothing about her singing that reveals her as another fly by night sensation in the making.

Everything, instead, reveals her to be a first class vocalist with the kind of talent capable of carrying careers. She has a deft sense of phrasing that never fails her in this song; she encompasses the assortment of emotions present in this song with a sure sense of what the song requires. “Twisted” explores a variety of feelings rather than just catering to an one note approach and this fact, among others, helps the track stand out from a lot of standard fare in this vein.

Her phrasing is the biggest revelation from this song for me. Her aforementioned ability to embody a number of emotions is a big part of what makes the song go, but her equal gift for sensing when to apply vocal force and when to back off makes a big difference in the way we hear this track. She has a throbbing percussive sound surrounding her voice that doubles the heartbeat of the song’s percussion track and gives the song extra weight it would have otherwise lacked.

The language is as pared down as the arrangement. Giadora avoids any of the self indulgence dragging down lesser singer and, instead, balloons each new line with the required amount of emotion for those lines to sink in. It isn’t a song that hangs around too long either. The same fixed goals reflected by its music and lyrics is present in the song’s duration as well Giadora never wastes any time and, instead, aims towards providing an all encompassing experience from the outset.

Giadora’s rise through the ranks of a competitive Los Angeles music scene distinguishes her from the run of the mill. It’s a dog eat dog environment. She had to bring every drop of the talent she has developed since her pre-teen years, even near toddler, beginning with learning acoustic guitar at ten years old. “Twisted” shows she has learned a great deal during the time she developed those skills and those lessons are paying off with a single that is difficult to forget. “Twisted” checks every entertainment and musical box without ever feeling like some kind of put on. The single hits hard and doesn’t go away easy.

User Rating: Be the first one !
Share
Previous Chris Douglas Debut Single Ain’t Getting Any Younger
Next Jennifer Truesdale – Through the Circle (LP)