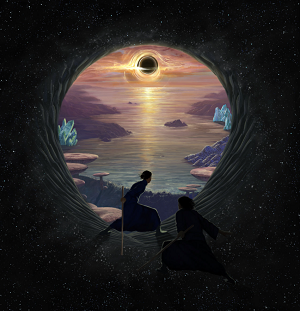 Instruments and words are considered by many who appreciate incredible music to be a link between humanity and the divine, and when listening to a record like Sandy’s new LP Magic Mind, it’s easy to understand the theory. Working elements of pop and experimental songwriting into a single, psychedelic format fit for both ambient buffs and occasional college rock listeners wasn’t the only mission in this record at all, but instead, just the starting point for an aesthetical mashup only true professionals could concoct. Magic Mind feels like a collection of scenes stripped from the dreams we never remember but have most every night we fall asleep, and while it doesn’t pretend to be anything other than a cerebral indie juggernaut, it remains one of the most versatile and appealing LPs of its kind to land on my desk this year.

“Standing on the Water,” the third song in this tracklist, was the first composition here to convince me – almost by itself – that I was listening to something groundbreaking, but its structural charms are essentially at the foundation of every inspiring moment in the tracklist, from the first few seconds of music we hear in “Dimension IV” to the haze of My Bloody Valentine-influenced noise in the gorgeous “Collapsing Star.” The title cut is the only song that plays by a set of rules independent from the other content here, but not without uniting the beginning with an end only the greatest of rock players could have written.

The concept here is thoroughly loose enough to be interpretive, taking us on a journey with a pair of lovers whose trippy experiences become the primary source for imagery in the lyrics, but the emotional narrative supported by every track in Magic Mind is rooted far more in reality than it is fantasy. As the LP was in its final stages of development and being mixed for widespread release, Alexi Glickman’s father passed away, leaving the leader of Sandy’s burdened with a degree of grief not many of us can grapple with on a normal day, let alone in the middle of post-production on a colossus of an album like this one. The trio of “Sunken Cathedral,” “Ghost Lake,” and “Moss Landing” elevate an otherwise difficult-to-amalgamate treasure chest of feelings that links this event and every other that preceded the completion of the record through a haunting resonance one can only describe as transcendent of the status quo in pop today.

David Glasebrook’s influence over the tracklist in Magic Mind no doubt invites the sonic multidimensionality we find in the retro “Sami & Sandy,” the title piece and its intro “Calabi Yau,” as well as the aforementioned “Ghost Lake” (featuring iconic Aussie axman Brett Garsed of Nelson and John Farnham fame on lead guitar), and this feature unquestionably brings some of the underlying surrealism of 2018’s Chime to an evolved stage many had hoped to hear in this follow-up. Whether employing a tense backdrop or the contrast between two sterling instrumental components, Sandy’s are going out of their way to use every inch of aural space this mix affords them, which not only makes their sound fuller, but it allows the unforced, naturally progressive dynamics of their music to flourish the way they were always meant to.

f there’s only one album you acquire this month, it needs to be Magic Mind by Sandy’s simply because of the unmatched look into the potential future of alternative music it creates for listeners inside of its nine uniquely immersive songs. Benevolence, wonder, a sense of adventure, and the sort of love that only comes through experience are featured pillars in the poetic story set forth by these tracks, but more than anything else, Magic Mind feels like an aesthetically full-bodied incarnation of a joint Fourth Dementia and Chime tailored to the needs of an increasingly demanding indie audience. 2021 hasn’t had a disappointing soundtrack by any means at all, with talented artists like Brielle Brown, Phantom Wave, and Griot B challenging the limits of their respective genres, but from where I sit as a full-time critic, Sandy’s could be the only group to have made something bigger than typical music categorizations can contain.

User Rating: Be the first one !
Share
Previous Izzie’s Caravan – “Blow The Lid”
Next Petrella “Songs of Many Colors” (LP)