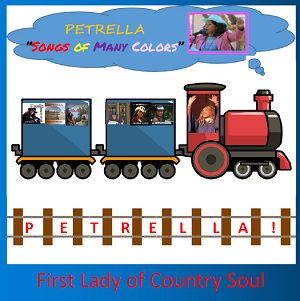 Petrella “Songs of Many Colors” (LP)

Petrella’s new album Songs of Many Colors is an album born from the pandemic. It isn’t the first nor the last release referencing the subsiding wave of illness sweeping the world over the last year plus but contributes a unique and individual document. Her work will join a chorus of voices responding to the COVID crisis without ever pandering to the moment thanks to the vibrant blend of her soul vocal chops and muscular country mixing strands of the present and past. Petrella has sustained a career in country music for over three decades and counting, working with countless top shelf talents along the way, but performs with every bit of the zeal and enthusiasm you’d expect from someone starting out.

Her impressive skill set tempers that zeal in all the right ways. Some listeners, however, may be a bit surprised by its opener. Anyone expecting Petrella to follow a purist’s path will be disappointed by her synthesis of the current and time-honored. It has an audacious spring in its step spiced with standard country influenced turns. It may be musically predictable for some, but much of the fun comes from getting there.

“Bring It Here Baby” kicks things off with a burst of enthusiasm. Petrella and her collaborators temper this slant though with noticeable restraint and achieve a stylish glide for the entirety of the track. There is a recurring steel guitar line running through the performance but the cut leans much more towards the pop side of the ledger. “Be Bop Hoedown” is much more of a genre piece without ever sacrificing the individuality setting Petrella apart from her peers and contemporaries. The backing singers add a measure of vocal muscle to the song as well.

“Sweet Broken Memories” is cut from the traditional country music themes of loss but embracing a thoroughly modern sound. She possesses a singular skill for recasting venerable motifs from the genre in a decidedly up to date light. Her fusion of soul inclinations with these expected turns is as successful here as elsewhere. The fiddle heard during “Lovin’ and Chasin’ the Blues” gives its some rustic verve without ever making it completely sound like a throwback and its live atmospherics are rendered well. Adding a live cut into the middle of a studio album is a bit of an odd move but neither suffers from the decision.

There are strong gospel strands present in Petrella’s music. “Hallelujah for Peace” gives full rein to this side of her musical vision and she throws herself into the lead vocal with full-on abandon. It has the customary assortment of backing vocals common for this type of music and five star production values. The finale “Pray” touches on similar musical themes but she expands on them with memorable effects. The breadth of Petrella’s musical imagination enables her music to keep one foot in the present and the past drawing strength from its influences. Songs of Many Colors has something for every listening taste and rates among the year’s most satisfying music releases.