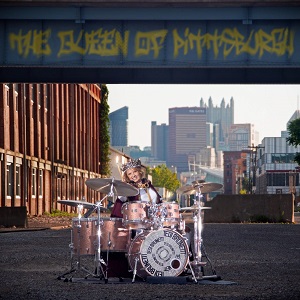 Tedi Brunetti is about as unique as they come, which should be expected from the rarity of mainly prioritizing the talent of being a vocalist that also drums; beginning her career with The Impalas, the B-Girls from Toronto, and Isis’ Carol MacDonald before branching off towards a solo career, it makes sense that her sound would find its way to bridging a gap between what Brunetti herself describes as a “sober Janis Joplin meeting Steely Dan in Memphis.” Her new album The Queen of Pittsburgh is exactly that, acting as a perfect homage to this era of rock with that signature bluesy Memphis twang. Part of that might be because it’s been co-written and produced under Dean Allen Sargent (known partially for his work with Blue Oyster Cult) as well as Michael Henegan, but for the most part, there’s no denying it that this project is still entirely Brunetti’s brainchild.

Containing a varied, grooving nine songs, The Queen of Pittsburgh is a success overall. Paying enough lip service to the under-appreciated (at least in the mainstream) city of Pittsburgh, Pennsylvania, it works as a rollicking rock album that paints a picture of the locale in all of its beauty, along with its nitty-gritty underbelly only a tried and true local could love. The groovy sensibilities that ooze out of every track are overwhelmingly infectious, which might give many a benefit to the fact that Brunetti’s main focus is percussion — never does a track within The Queen of Pittsburgh lack in regards to the impeccable drumming.

“Eat, Sleep, Repeat” opens the album up in a funky, bass-driven fashion that feels equal parts indebted to classic rock as it does a Broadway show tune just dying to hit the stage. The way Brunetti captures the mish-mash energy and calamity associated with any big city combined with the hunky-dory blues rhapsody tied to Pittsburgh is gorgeously attained. The saxophone work contained within the introductory track is outstanding and the mantra-like chanting chorus that accentuates the woodwind feels entirely fleshed out and primed for radio. Other standouts within the album include “Seduce You,” an unabashedly sexy and fun rock standard that feels entirely bold in its approach to its seductive lyrics, and the title track “The Queen of Pittsburgh,” which brilliantly uses swelling horns to great benefit. Tedi Brunetti’s strongest tool beyond her drumming has to be her lyrical prowess, and the latter is a badass anthem fully deserving of her skills.

The effortless confidence that continues to exude from start to finish across the entire nine songs featured on The Queen of Pittsburgh will assuredly put a pep in your step and motivate you throughout any possible antagonist. Brunetti’s growly vocal style feels self-assured, too, and inimitable in the best ways. As much as it feels owed to the Joplin school of training, Tedi Brunetti owns it within an entirely different style and mindset. There’s no certainty that Pittsburgh could secede into a monarchy anytime soon, but if they were to do it, there’s only one person fit to the Queen of Pittsburgh: you’re looking at her.

Share
Previous Petrella “Songs of Many Colors” (LP)
Next Andy Michaels (feat. Sharon Court) “She Reminds Me of Beautiful” (SINGLE)