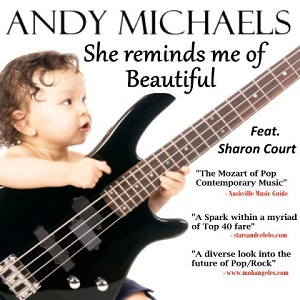 If you’re like me, you’re ready to shake things up when it comes to your musical library. And if you’re like the millions of other parents out there that never knew the love they would experience and have once a little one entered their life – then the song “She Reminds Me of Beautiful” will be a welcoming new addition either way. Like a bundle of joy, Andy Michaels featuring Sharon Court’s “She Reminds Me of Beautiful” is a gentle bounce and blissful experience. Always mindful of the heart and the soul, Michaels, who is based in Perth, Australia, is an alchemist when it comes to spinning gold into his music.

The song starts out with Court singing. Her voice is interesting in that she’s in the middle range. She doesn’t sing falsetto, but she’s not exactly a low tenor either. The way the song is mixed, there are almost moments where her voice is under the music current, as if she were singing from afar or a dream. I wouldn’t call it murky or blurry, but something of a filter is separating her and the listener. It changes later. When Michaels sings, his voice is like a bird, soaring above all the sounds that are churning the ecosystem. The light escapes when he chimes in, the clouds open. The rhythm section is not a powerful thunder, instead it’s a building, evolving machine that steadily runs. A piano trickles along, as does a caressing violin. This song is picture perfect.

“She Reminds Me of Beautiful” is about a man’s love of a child, and how every time he looks at the child, he sees the beauty of the child’s mother in the child’s eyes. I think this song expands into any grandparent, father, aunt, uncle. We all see so much in a child’s face, and especially in their laughter we find pure happiness. I loved the story Michaels’ creates and the back and forth he has with Court. The two have a strong rapport and as the song moves along, it’s a musical marriage in voices complimenting each other. By the song’s bridge, the story has moved along even farther, and Michaels has once again established his high standing in adult contemporary/folk/pop music. After previously releasing the inspiring songs like “Only Love Knows the Meaning of Goodbye”, “Home”, “Angel”, “Incendiary Heart” and “Planet 8” (also with Court), Michaels is refreshingly honest and moves his poetry to a new level.

Whatever your musical tastes take you, or the songs you choose to escape into, I encourage adding “She Reminds Me of Beautiful” even if for one only listen. In a world of Spotify, YouTube music and millions of internet radio stations, it’s easy to get into a pattern of what is safe. I know I get into the habit of sticking to the same artists and genres – but the time is right to try something exciting. “She Reminds Me of Beautiful” is the calm, cool, collected balance the world needs. And Michaels is just the guy to do it.

The music of Andy Michaels has been heard all over the world in partnership with the radio plugging services offered by Musik and Film Radio Promotions Division.  Learn more https://musikandfilm.com