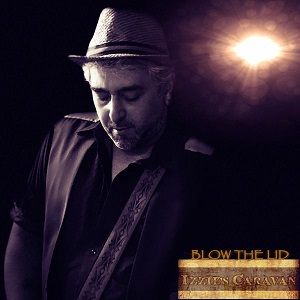 Opening an album with a song like “Roadkill Rita” is a bold move most might not want to start their debut LP out on, but there’s nothing typical about Izzie’s Caravan, a fact listeners will surely discover with Blow The Lid. The full-band sound is on total display, having evolved over the last two decades from being the now-defunct, ill-fated band The Deep Impacters to the newer rough and rowdy formation of Izzie’s Caravan, and with a few EPs under the new iteration’s belt, the caravan was well underway.

“Roadkill Rita” paints an electric opening picture for the album, as Izzie’s guitar work tears open the scene before Sim’s vocals erupt in a way that will undoubtedly remind listeners of early Aerosmith, which Izzie’s Caravan cites as a core influence. The lo-fi production deepens the rock ’n’ roll headspace that Blow The Lid will undoubtedly put listeners in, with “Stick It To Ya” only continuing the trademark sound by furthering the roadhouse aesthetic. The vocal mix is interestingly pulled off, with a vocal effect almost concealing Sim’s voice to the point of just being another instrument in the lineup – a keys solo brings another speck of variety to the rocking repertoire. The title track for the album opens with a minute of ambient sirens and gunshots before delivering the toughest riffs the album has put on display thus far; Sim’s vocals are less concealed here, and the verses shift tempo into something truly epic when put in contrast with the killer guitar that accents the entire song and closes it in true rock fashion.

Next, “Return To Midway” slows things down and brings the keys back in with a chugging road tune that only heightens the flavor of Blow The Lid; it almost feels a little typical or underwhelming following up “Blow The Lid,” but the professional craft contained within its near-six-minute runtime more than makes up for the contrast between it and the preceding songs on the album. “Lost” continues the slower trend of songs but never settles into a lull, and Izzie’s guitar is allowed to be crisp and clean in new ways. “T-Bonecrash” lives up to its namesake by bringing the speed up alarmingly fast, practically breaking the speedometer pre-established by Blow The Lid. Penultimate track “A Beautiful Nightmare” opens with a thunderstorm and works both the slower, softer melodic side of Izzie’s Caravan as well as the fastidious, polished guitar solos in tandem by giving up another ballad accentuated by piano and female guest vocals that establish a breath of levity in an otherwise fairly serious and somber album.

The album finishes with “Curse of Anastasia,” which again opens with a thunderstorm to continue the theme, and this song truly functions as a magnum opus for the entirety of Blow The Lid, coming in at just over eighteen minutes in length. The song works as a mini-album within itself, functioning entirely as a condensed work with highs not previously touched upon within Blow The Lid. It will certainly take a lot out of listeners to venture through this entire album in one sitting but it’s a deeply rewarding experience to those patient enough to attempt such a feat. Izzie’s Caravan has started the musical trek on the right foot and their sophomore album certainly has its work cut out for it!