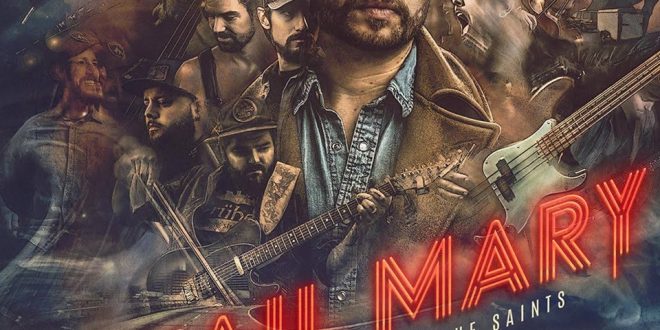 Menacing heavy rock riffs are met with forbidding harmonies of an acoustic nature in Hail Mary, the latest release from the one and only Shane Smith & the Saints. Singer Shane Smith tackles drama, dreams and demons of a personal variety in songs like “The End,” “Oklahoma City,” “Last Train to Heaven,” “We’ll Never Know,” and of course, the climactic title track, and uses every sonic weapon set in front of him while doing so. With the Saints delivering some of their tightest work yet in this LP, Smith is given the opportunity to flex his vocal muscles without coming across as arrogant or cocky in the slightest, and even though this is a collective effort of all five players, there’s never any question as to who the star of this show really is. I’ve been covering red dirt, outlaw and alternative country acts for most of the last year, but I don’t believe that I’ve heard another band like this one. Hail Mary is an involved-listen that is tough to put down once it’s been picked up, but it’s theatrical frills and sexy swing offer a truly one of a kind listening experience to fans of all stripes this summer.

Compared to the group’s last two albums, Hail Mary has a really sprawling, jam-like feel to the bulk of its tracklist. “Whirlwind,” “Little Bird” and “Parliament Smoke” are constructed as if to represent an excerpt of an extended instrumental session between Smith and his Saints, and my gut tells me that in their live shows, these songs transform into all-out stadium-shakers that could last twice as long as they do in this record. None of it sounds particularly robotic, over-rehearsed or technologically altered by producer Mark Needham (whose résumé speaks for itself); in fact, quite the opposite. All of this music has been wrapped up like a present you would tuck underneath the Christmas tree, and yet it features a rustic earthiness to the tonality of its key instruments that tethers it much more to independent country than it does the mainstream establishment. Hail Mary is sort of a rebel yell, or better yet, a response to the artificiality of a jaded Nashville scene if you will, and it couldn’t have been assembled by a better cast of country musicians.

This isn’t the first time that Shane Smith & the Saints are making headlines with their incredible music, but I think that Hail Mary could be the record to finally elevate their sound onto the primetime stage, once and for all. They’ve been flying under the mainstream radar for a few years, and arguably came close to crossing over with Geronimo (one of my favorite country albums released in 2015), but there’s something different about these eleven tracks and the underlying message that they impart when absorbed in a single sitting. Smith is poised to reach an audience that has been unforgivably neglected by the major label artists to the right of the Saints with this record, and if these songs are a taste of what’s yet to come for him and his band, then their ascent through the hierarchy of 21st century country acts will certainly be impossible for even the harshest of critics to dismiss as illegitimate.

User Rating: Be the first one !
Share
Previous The Inoculated Canaries “Sneakers”
Next Relic Kings’ “Blinded by the Sun”