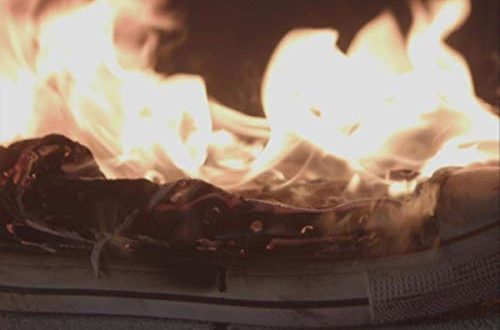 A girl is casually tying her shoes when she meets a friendly face on the stairway to the subway. Soon after, the pair are inseparable, basking in the glow of each other’s love, sharing the simple moments – like getting a new pair of sneakers – that a freshly-minted couple cherishes more than most anyone else does. The honeymoon period doesn’t last though; after a while, those special moments become mundane, and the two kindred spirits are at odds like neither had ever thought possible. This is the music video for “Sneakers,” the latest single from The Inoculated Canaries, who are getting raw, intimate, and more emotional in this track that then they ever have in the past. “Sneakers” tells a gut-wrenching story that is all too familiar to many of us, but its addictive grooves save the song from being just another alternative rock dirge.

The single itself has a very streamlined structure. The verses are fluidly executed, the riffs follow an even rhythm with the bassline, and the drums are mixed so tight that they don’t plow through the backend of the track so much as they sweep beneath the harmonies that the vocal/string combo conjure up. There’s no rigidity to this arrangement, but there is plenty of texture in the instrumentation, mostly thanks to this exquisite master mix (which is possibly the best of any that I’ve reviewed in the past month). We feel all of the muscularity that the instrumentation brings to the table in this song without having to sift through the muddiness of an unorganized mix, and that alone makes it a unique release this season.

Both the music video and the song were brilliantly produced, and compared to what we heard in last year’s Trying Times, “Sneakers” has an almost cosmopolitan feel that aligns it more with the poppier side of alternative music than previous efforts have been. Despite the fact that this isn’t quite as edgy as some of their earlier work, I don’t get the impression that this band is moving away from their trademark sound. If anything, they’re expanding on a template that was created as far back as their 2013 debut, and rather than doing as many of their peers have – recycling the same concept through two or three different EPs – they’ve broadened their creative horizons and, as a result, become a more elite unit.

I can’t wait to hear more from The Inoculated Canaries moving forward. They’ve really grown as a group in the last two years, and I think that if this single manages to get into steady rotation on college radio this summer, they’re going to end up attracting more attention to their brand than anyone initially expected this season. “Sneakers” is a really rousing composition that doesn’t try and placate us with the tried and tired love song fodder that, to be frank, simply doesn’t cut it for this discriminating generation of Millennial music fans. They’re taking a different look at a classic story in this song, and while I’m sure that this won’t be the last time that they’re winning over critics and fans alike, this latest release is definitely a highpoint in the ever-evolving career of this talented New York band.