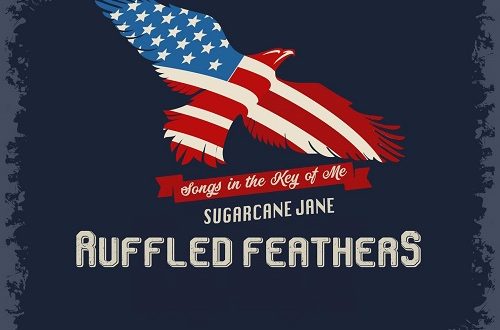 Sugarcane Jane releases new CD “Ruffled Feathers; Songs In The Key Of Me”

Anthony Crawford and Savana Lee are the Alabama duo Sugarcane Jane, and their new CD Ruffled Feathers; Songs In The Key Of Me – is a brilliant bunch of folk leaning America tunes made over an inspiring one week period. These seasoned vets are on their tenth release, so there is no wonder where their chemistry and ability to come up with such a timely studio recording in the lockdown. The songs are fresh and of the day, which you find them to be, track by track, with songs like “That’s what I See” and “Answer Of The Day” being two particular stand outs.

The album is fantastic and the music kicks off with “Feelings In Song” and the immediate feeling is one of a total country vibe with an almost pop inclination, having never heard Sugarcane Jane before. But if I were to liken it to anything it would be Fleetwood Mac speed, as well anything like that but more on the country than blues and rock side. It just has a real Tom Petty and Bonnie Raitt mix to it. But that is really only a first impression, and there’s a lot to go, so it’s nothing to measure everything by.

“I’m Gonna Grow Me A New Mind” shows a whole different side as they come blasting out with a very vibrant song about keeping it together in these hard times, and spreading it around with friends who need a check on their own minds. The message is to express yourself and not stay quiet about what is wrong with the world and it is a positive one I was glad to hear. It moves into the next track as if to precede even more of the same message but with some applied intensity that makes the two go together so well.

“The Answer Of The Day” is what it’s really all about if you listen to lyrics and wrap your head around that as much as the music, because it has something to say about the things going on today, and that’s not always the purpose of a song. If you can’t relate to this, you’re just not listening. “Good Book Stories” follows with another upbeat song that keeps the flow of greatness going with a more storied song. This is also where some tasty guitar parts start to creep in and the playing is great, if somewhat economical for those wanting more.

“Waiting On Answers” is where more guitar shines right from the start and that’s one answer to the former from the get go. This is a wonderful track with everything going for it, and I find it third in the running for featured tracks on the album. “Let The Media Die” is probably the strongest message of the album, as the title speaks for itself and another one where the lyrics must be heard. “Long Overdue” sticks to the Americana script and delivers another excellent blend of folk, country, and rock. And from the rest, the track I recommend the most is “That’s What I See,” as it brings the most to the table on this killer album.

User Rating: Be the first one !
Share
Previous “Under One Roof” (Single) by Lisa Mary
Next “Falling In” by Prince Bellerose