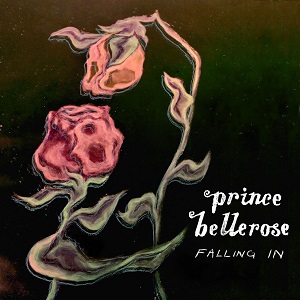 “Falling In” by Prince Bellerose

From its sticky guitar riffs and the tight trio sound, Prince Bellerose crowns itself a winner with the new hit “Falling In”. If ever there was a song that the listener wanted to blanket themselves into, cocooning into the syrupy, murky tones, this is it. Virginia’s Prince Bellerose, who identify as non-gender conforming, do the same with their wildly genre-spanning sound. Jazz, funk, rock and pop – there’s just no telling where this song will take you. No license required – this song takes the listener to far off places.

Something tells me I should go the mile…when we are close you are the moon to my tide, a modest, youthful-sounding Daniel Bellerose (who’s also on bass) sings. Bellerose’ chorus structure I-I-I’m falling in, but I’m into deep and I cannot swim, has the vocalist reaching a falsetto octave with the words into deep. The texture changes and the song goes from pop rock to jazzier rivets in moments. The guitar riffs underneath, a blizzard of melodies and higher-pitched throw-downs, keeps the song buoyant. The guitar riffs lend themselves to the idea of a ringing bell, or cascading lights reflecting from the waters’ waves. I found myself humming the melody days later, with Bellerose’ banner voice running circles in my brain. Joining Bellerose in the band are Valentin Prince on vocals, lead guitar and Joseph Harder on drums and backing vocals. Their musicianship is solid and echoes the sounds of Spoon, Weezer, Third Eye Blind and this might be out of left field, but Los Lonely Boys (especially “How Far Is Heaven”).

The jazz aspects in “Falling In” fall into place. Peppered throughout the track, the groovier bass tones cool the mood, giving more fodder to the brightness in Bellerose’ vocals. The backing harmonies, too, blend together in a most light-hearted way. This endearment gives the track a brassy sound without the inclusion of a brass instrument. With just three instruments assembled, the blended harmonies add so much more. The river bed of sounds is a lush well; one that the listener can easily re-visit without feeling bored. I can easily imagine this song being played under the stars at a large amphitheater….it begs to be played in the outdoors. The indoors can’t contain a song like this.

So how does the song make me feel? It made me feel completely in-tuned to all the instruments as well as the vocals. It’s a polished piece, but not so pristine that it sounds computer generated. There’s a lot of heart in Bellerose’s vocals, just as there’s a great deal of passion placed in the music. I found myself wanting to hear this song more and more – yearning to lose myself into the intoxicating musicality. They have a commercial appeal, but the more you dive deeper into “Falling In” the more you uncover and unearth the intricate, methodical sounds that make the fusion of jazz and pop a mathematical equation. Colors become three-dimensional shapes and the harmonies cross platitudes. It’s a natural high. “Falling In” goes beyond the surface.