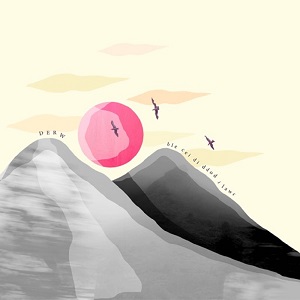 A little playful in spirit but entirely more surreal than it is anything else, the vocal harmony in Derw’s new single “Ble Cei Di Ddod I Lawr” is probably the most alluring element in the song from the get-go, but don’t get me wrong – it’s not the only reason I would recommend it to pop fans everywhere this season. Born of a combination of folk and moderate indie pop, Derw’s Welsh lyricism and elegant mixture of influences make this is a sonic cocktail geared towards alternative aficionados but entirely welcoming to most anyone who can’t get enough of a smart melody when they hear one.

This track features such a beautifully controlled rhythm that it’s occasionally a bit distracting when trying to split our attention between the various arms of the cathartic core. Derw are pretty amazing at employing every part of the music – groove, rhyme and melody the same – when maxing out the emotionality of a given narrative, and in the case of “Ble Cei Di Ddod I Lawr,” they advance the passion in their words unto us through a mixture of mammoth physicality and quaint harmonization that I haven’t heard anywhere else in 2020. It’s a unique combination, and definitely one I’d like to hear a little more of in the near future.

The folk element in “Ble Cei Di Ddod I Lawr” is absolutely entrancing in its relationship with the obvious pop aesthetic in play (specifically with regards to the hook), and best of all, I don’t think it takes a professional critic to appreciate its artistic identity. There’s as much of a Joni Mitchell twist to the unfurling of these lyrics as there is a bit of a more contemporary pop fluidity, and if you think that’s something you’re going to hear a lot of when browsing the FM dial this September, I think you’re in for quite the rude awakening.

As we drift along with “Ble Cei Di Ddod I Lawr,” the guitar component in the mix introduces a psychedelic influence to the music that Derw should really try experimenting with more in their next trip to the recording studio. The string play is accessible and humble in nature, but the cerebral quality it lends to the overall harmony is something that I haven’t been able to shake every time I listen to the song. These players definitely aren’t the easiest for me to brand, but then again, that could be more than half the reason why I find them so appealing.

Striking both cosmetically and compositionally, Derw’s “Ble Cei Di Ddod I Lawr” is a great listen for eclectic folk and indie pop fans the same, and last time I checked, those weren’t exactly two demographics that agree on many of the same records. 2020 has been anything but orthodox for the music community and the world at large, but out of the societal discord we’re seeing a lot of unrecycled melodic brilliance arising from most every corner of the map, and particularly out of the British underground. Derw are one of the finer Welsh acts I’ve heard in a long time, and something tells me other American listeners are going to feel the same.