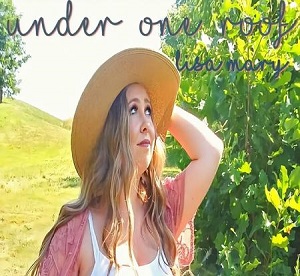 “Under One Roof” (Single) by Lisa Mary

In her new single “Under One Roof”, Lisa Mary captures the hope and the romanticism of taking the relationship to the next level. Living together and buying a house is a daunting task, and Mary’s catchy country tune takes great lengths to ease the journey. Her lovely harmonies and the solid songwriting, this Metro Detroiter is one to watch.

Armed with an acoustic guitar and a snappy drum beat, Mary’s voice has a smoky hue. Peppered on top of her vocals is a slight twang, and voice that could also be rooted in pop music. When she sings the chorus from the outside looking in, this is where we begin, be my shelter, be my bullet proof, under one roof, you hear the caring and optimism dangling from her voice. I like that her voice has a robust amount of confidence, but it’s very endearing. It’s not too delicate – she’s a strong woman. She might be singing about starting a new life together and making one home, but there’s a strong sense in independence running through her vocals. The guitar, backlit like a sun kissed clean bed sheet from the clothes line, adds a lightness to the music bed. If you were to just isolate the guitar, it dances in the light next to Mary’s vocals like a happy couple.

The melodic tone in “Under One Roof” is indicative of Survivor’s “The Search Is Over”, LeeAnn Rimes and Kacey Musgraves – Mary has a solid grasp on a song that artistic branches reaching into several genres like Americana, pop and country. I liked that there are not extra bells and whistles on the production. While I suspect the drumming is a machine, the acoustic guitar bleeds just as genuine as Mary’s Michigan-bred vocal prowess. Her tale is just the beginning of starting a life together, but you can almost imagine the years and years passing by in this new home. That idea and that imagery gave me the most Musgrave vibes (especially “Rainbow”).

I think Mary forges her own sound, though, and while she might have structure comparisons to other artists (it’s inevitable) she’s truly mesmerizing. The chorus is catchy and she continues her vivid lyrics with the lines this house of cards is gonna last, if we tell the truth, we’ll make it under one roof. I think her projected optimism is charming and falls sweetly in line with her cozy appeal. I also really like that this song has a realness to it, it’s not gushy or sappy. I can easily see this song making its way to several wedding song playlists.

“Under One Roof” is an excellent debut for an exciting country artist not based in Nashville. Who says you have to be in Tennessee to create moving, melodic music? Detroit or Hitsville USA is back to churning out hit makers. Lisa Mary’s “Under One Roof” feels right, it feels like home. Mary’s latest outing is a solid foundation and if this is a peak of what’s to come, “Under One Roof” is just the first level. “Under One Roof” is from her album Everyone Has a Story To Tell.

Share
Previous Federico Balducci’s The World Forgetting, By the World Forgot (LP)
Next Sugarcane Jane releases new CD “Ruffled Feathers; Songs In The Key Of Me”