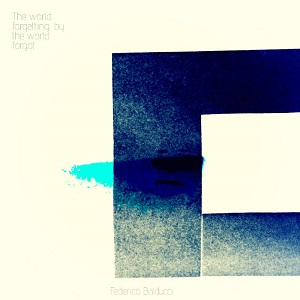 Federico Balducci’s new album, titled The World Forgetting, By the World Forgot… and inspired by poetry found in Gabriel Don’s Living Without Skin, sees the experimentalist dividing a singular abstract performance in 27 unique movements (“Poème sans titre I-XXVII,” respectively), most of which tend to last between one and two minutes in length. Despite the complex structure of the music, which becomes quite evident in the chilling trio of tracks that open the album, there’s scarcely a moment in which the fluidity of the material is impeded by the textural presence of the instrumentation – an element which grows quite physically imposing nevertheless by the fourth movement. Balducci introduces us to sonic poeticisms of the most erudite variety in this most recent offering, all while steering clear of the mindless self-indulgence all too common among his avant-garde peers.

Crawling out of the shadows, the fifth movement of “Poème sans titre” attacks us with a moderate brawn that subtly finds itself erupting in the sharpest of tones by the midway point of the following track. The next three minutes or so (movements seven through nine) impart a much more exotic compositional wit than the preceding selection of content does, but it isn’t until we sink into the ominousness that dominates the middle portion of The World Forgetting, By the World Forgot… that we’re able to appreciate the complete depth of emotionality in play here. There’s so much being communicated exclusively through tangible, non-melodic foundations in this record that it can be easy to overlook the cosmetic value of tracks like “Poème sans titre XIV,” one of my favorite 62-second moments in the whole LP.

The mood warms a bit as we get into the sixteenth movement in the record, but only long enough to leave the audience ill-prepared for the iciness of the next four tracks, which includes the nearly four minute-long “Poème sans titre XVII,” the beast of The World Forgetting, By the World Forgot…. Balducci’s neglect of color in the melodies as we press on only makes the more heavily textured components a focal point, but I get the impression this was entirely deliberate on his part. After all, if he didn’t want as immersive an album as he crafted here, I don’t think he would have constructed the final mix to be quite as wonderfully abrasive as it is in this instance.

Melancholy washes over us as we inch closer and closer to the finish line in The World Forgetting, By the World Forgot… before meeting a haunting climax in the spine-tingling “Poème sans titre XXV” and its neighbor, the dark “Poème sans titre XXVI (I’insible).” The twenty-seventh movement, an epilogue to the brutishness of the aforementioned material, concludes our journey with Federico Balducci is if to imply that all of the hollow tones and thick bands of melodicism have suddenly departed the world in an ascension towards the heavens they once seemed so distant from. The World Forgetting, By the World Forgot…, in a nutshell, is a thought-provoking concept piece specifically designed for the discriminating avant-gardists among us, but all the same, it’s absolutely one of the more unforgettably provocative and ghostly records I’ve listened to in all of 2020.