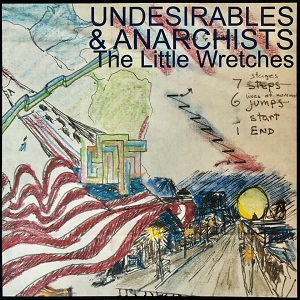 I’m not sure The Little Wretches find the specters of living in Pittsburgh to their dismay, or if it’s life in general that causes their angst? Either way, be it the hundreds of bridges that can lead them away from their city, or the dismal Pirates, The Little Wretches still find time to rock and extract some inspiration in their excellent collection Undesirables and Anarchists.

If I had to cast my vote for the standout songs on the album, I would start with “Give The Knife A Twist”, a kicker of a tune. The guitar is mixed at a higher level than the drums and hovers just slightly over the bass guitar. Lead singer (and songwriter) Robert Wagner sings like he’s been singing in clubs for years, and has complete control of the captain’s chair. While the guitar is crushing, Wagner’s doing his thing and slaying words (every broken dream gives the knife another twist).

The next track, “Almost Nightfall” has an even more robust music bed. This time a soothing harmonica, almost like a whistling wind in the winter’s night, sweeps through the song’s middle. Wagner is joined by female vocalist (the Janis Joplin-like Rosa Colucci) and the song breathes a sense of wonder, wrapped in a rock jacket.

The song that really grabbed me, “All Of My Friends” comes near the end of album, and it really personified the gregariousness and personality, I believe, found in Wagner and his band. It also mentions the album’s title ever-so slyly (all of my friends are on some list of undesirables and anarchists, it’s not even safe to admit you’re one of my friends…oh what a story we will tell, someday from jail). Once again the backing music is ripe with strong percussion and bass lines, as well as a honey-dipped guitar. It’s another blue-collar rock track that gives the listener a few grins, but should be applauded for its musicianship.

Colucci closes out the album with the gripping story, “Running (Was The Only Thing To Do)”. So much of this song reminded me of the film, Eddie & The Cruisers. It’s not that Colucci sounds like John Cafferty from the Beaver Brown Band, and this song is missing a saxophone, but it’s a great tempo and groove. Colucci carries the song with the same confidence and spark as Patti Scialfa (E Street Band). She colors the song with her stylish soul.

Wagner, who outside of music is a counselor, co-founded The Calliope Acoustic Open Stage event. Undesirables and Anarchists is his second release in 2020, joining Burning Lantern Dropped In Straw. As he continues to crank out new material and new lyrics this year and beyond, I’m certain listeners can expect more shake-the-system rock tunes. I think it’s safe to say that The Little Wretches have a big sound and big picture echoes. They aren’t as misfit as they claim to be, but they sure do play by their own, winning rules. The Little Wretches’ Undesirables and Anarchists is a must listen.