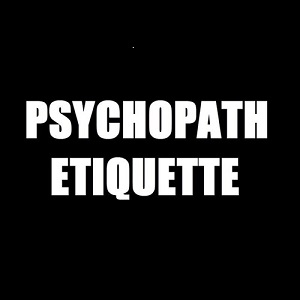 Psychopath Etiquette are the Southern Maine-based duo of brothers David and Paul Sprague, with roots in folk and branches in rock which often puts the music in its own class or winds up Americana as of late. The six tracks on their EP – Rough Draft, depict them equally in both categories, as if there are no difference between the two. What is left out is the country that Americana is more heavily based in, with an emphasis on folk and indie rock instead. The result is a more stripped back style of folk rock for a hybrid all its own.

One thing Psychopath Etiquette are not is pop music, but they do write good catchy songs because they are good musicians. “Trashed (Treasure)” opens the EP with nothing but solid proof of that and serves to only intrigue for more. In fact, I was drawn in from the start, then it only got better as the song went. This song is like putting two things that do not go together and making them fit. One is trash and the other is treasure, but you have to listen to find which is which. Either way there is no denying it’s a good opener for the Rough Draft EP, sticking to the ears like glue.

The second track “Life,” gets into a harder rocking groove from the start, but the vocals stay more on the folk side of things over a percussive backdrop on a song about dreaming and being patient. Two of the things that life would not be complete without. This one is much more about how things should be than how things are, as seen through a dream rather than reality where it is more often less desirable. At the end of the day, life is but a dream and music help’s it along with each passing year.

“All My Time” plays like a cross between the previous two cuts, but the half-spoken words make a much stronger statement which hangs it about them with some lovely guitar work and great melodies. If takes all the time and money to get something right, it’s explored in these lyrics. And anything entitled “Heart Vs. Head” would only fit at this point on the record. It’s almost as if they’re thinking for you with each track you play on the Rough Draft EP, as this fits right into the track list as if you can almost see it coming.

With “Show And Tell” it gets even more adventurous with the lyrics to get the deepest point across on the record, by going the route of ask me and I will tell you, and even show you. This is the love song of the bunch, and it really cuts through life a jagged edged knife in the heart. It always pays to have a good ballad, and this is no exception to that rule. But “When Anxiety Attacks” is a case of saving the best for last, and that is why it deserves the current attention it is receiving.