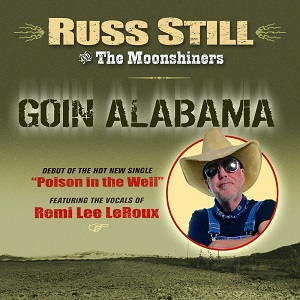 Russ Still and the Moonshiners release “Poison in the Well” (Single)

Russ Still and the Moonshines’ country and southern rock influences are audible in the new single “Poison in the Well” but concentrating on these strands at the expense of others does this great band a disservice.  There’s much more going on with Still’s music than paying tribute to the past. There’s a personal voice behind the band’s lyrical content that has a signature quality while still traveling familiar territory with regards to subject matter. “Poison in the Well” is an exceptional example of that skill in action and stands up against Still and the Moonshiners’ past work as an ensemble. There isn’t a weak link in this six-piece lineup and each of its individual components boasts a palpable lift that retains listeners’ attention from beginning to end.

I love the guitar sound Still and the Moonshiners achieve on this song. The band brings three guitars to bear without ever sounding cluttered; it’s a case where a small group of musicians are existing on the same page. Russ Still plays one of those guitars, but he likewise contributes some on point work on keyboards that enriches the melodic value of this tune. Still and his musical partners never come at the track in crass, predictable fashion. Five-star rhythm section playing from drummer Mitch Flanders and bassist Jonnie Burman complement the guitar playing courtesy of Russ and Ben Still. David Leonard rounds out the guitar trio.

The track has a dramatic construction without ever feeling overwrought. With a sub four-minute running time, there’s really no room for ostentatious theatrics and, besides, Russ Still and his cohorts don’t write and record that sort of music anyway. There’s a strong degree of soulfulness running throughout “Poison in the Well”. Much of it comes from Russ Still’s voice and lyrics. Still doesn’t have a histrionic singing voice, but he does possess a voice rough and ready with the gravel of a life well lived and bursting with experience. It has plenty of blues, but his phrasing is top notch and brings the words to even greater life.

I can’t find fault with the song’s construction. It is obvious Still and the band are tried and true hands when it comes to building a sharp and well-defined rock track. The rock presence is much stronger in “Poison in the Well” than the customary country influences making themselves known in the band’s music, but there’s no bash and thud sound marring the cut. “Poison in the Well” has a real swing listeners can latch onto from the outset.

There’s a reason why Russ Still and the Moonshiners have demonstrated staying power. They have command over basic musical fundamentals their skills allow them to expand on a well-tested and popular style making it relevant for a new generation of music admirers. I expect Still will continue his ongoing upward trajectory as a songwriter and the long, fruitful partnership he shares with the other members of this band will only continue to grow. There’s nothing about “Poison in the Well” convincing me otherwise.