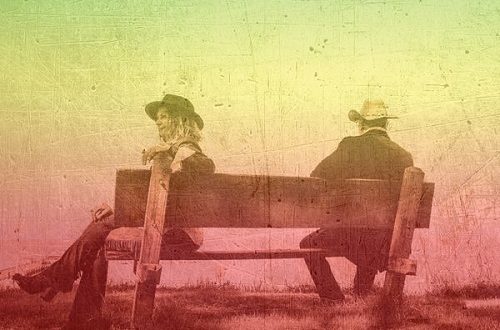 I cannot urge music fans too much to give this album a chance. There are too many who love music, truly value it in their lives, that remain sadly shut down to certain styles thanks to cultural or personal bias. We are told and taught music such as the songs you find on Ten Penny Gypsy’s second studio album Fugitive Heart occupy a particular niche in our society. The folk festival or small night club – it’s inconceivable music such as this can possess mass appeal. Despite whatever meager sales figures this new release may or may not tally, let this paragraph, if nothing else, push back against the idea that traditional, or “Americana”, music has limited value. Our reactions to music are, of course, subjective. The concern that these songs show for the human condition, however, is irrefutable fact.

Fashioning a new life from an old one now gone is much of the subject for “Making Headway” and Justin Patterson’s singing and songwriting alike is perfect for this topic. His musical partner and second vocalist Laura Lynn Danley doesn’t share every line with Patterson but they raise the level of excellence several notches when their voices sync up and take over the song. Melody is an important factor in the album’s ultimate success and this track makes its mark in that regard as well.

“Brick by Brick” is one of two tracks on this release owing a considerable debt to blues music traditions. I believe few acts in this vein write and performs songs about interpersonal relationships containing the depth you find in Ten Penny Gypsy’s songwriting. Despite the traditional music trappings, “Brick by Brick” is forever contemporary in its lyrical concerns. The title song has a much more upbeat personality despite the continued complexity of its emotional terrain and the rise and fall of the arrangement will make it a favorite for many. Danley and Patterson answer the challenge with one of their best vocals ever.

“Lovely Melancholy” is fully immersed in a specific country sound, but the duo never pushes the pedal all the way to the floorboard. This restrained approach is typical for the album overall. Ten Penny Gypsy and producer Anthony Crawford juggle a limited assortment of instruments with a sure idea of where they are going you hear from the first note. The second blues influenced track on the album “Road to Memphis” will have a lot of fans, to be sure, but many listeners may hear it as a throwaway number when compared to the album’s more ambitious efforts.

Another track likely to be a favorite for many is the cut “Train Won’t Wait for Me”. This song returns to an outright country music influence rather than leaning in various directions and the arch-traditional instrumental additions, like steel guitar, don’t sound hamfisted. Instead, they are another instance of how well the tandem pours old wine into new bottles. It’s a defining characteristic of Ten Penny Gypsy’s Fugitive Heart and likely will continue to be so with their future releases.

User Rating: Be the first one !
Share
Previous “Out Of Pocket” (EP) by Chris Mardini
Next Chris Ning “Explode” (SINGLE)