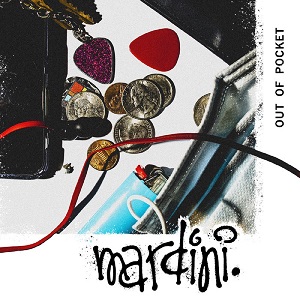 “Out Of Pocket” (EP) by Chris Mardini

Mardini gets his first words out with the enormously satisfying Out Of Pocket EP, his ultimately qualifying debut release that is one of such high standards it was produced by Grammy Marc Swersky (Hilary Duff, Joe Cocker, etc).  The top-notch skills of Tony Black (Alicia Keys, Jay-Z), and Mark Needham (The Killers, Imagine Dragons) are also behind the mix of this remarkable EP.  I can only say good things about Mardini, because these five new songs are all I have to go off of, and it is not hard to express what a groundbreaking sound every song on it has.

“I’ll Try” gets started and the consensus right off the bat is that the Mardini is not a pedestrian one by any stretch of the imagination, it hits you right where you want it to, so, if you’re any kind of music enthusiast you can agree there is nothing to balk at here.  I know I couldn’t helped but be drawn in and I cannot be alone once you’re hearing it, or we’re not listening to the same artist, or, you’re probably also not a critic getting the opportunity to hear such a marvelous singer with the debut product to show for it.

Mardini sounds like an old soul, he has the rap thing down but this is also a vocalist to be measured with on the same level as his early influences, some of them being from the Seattle grunge scene and need no mention as they can clearly be heard.  “Sleepless” is what you would call an immaculate piece of work that simply hypnotizes you at every turn, and it is worth watching on video if you want the full effect of this terrific song.  I am not sure if “Sleepless” is for everyone listening to the rest of what Mardini has to say, but it has its own charm.

The best thing about Mardini is he does not stick to one particular-genre of music, instead he blends an assortment of popular genres to come up with what very well might turn out to be his own class of rock and soul music.  “Pockets” is a return to the former styles found earlier on the EP, with Mardini getting his full rap on for the rest of the disc.  And it weighs in heavier handed than them, with some harder message to swallow making it on the tougher side.

One thing I could not do after hearing Out Of Pocket was ponder the thought of never hearing it again, as it took up the rest of my day and landed squarely on my playlist.  “Throw” is the fifth track in which closes a debut that meets the standard of any major artist working today, and it too is not without its harder thoughts coming from Mardini is his lyrics that hold back nothing in his quest to be heard.  And heard by the masses in which he is destined to be heard by is what I will be watching for because the appeal is so evident.