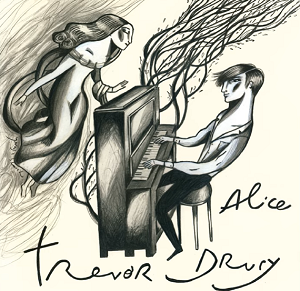 In a pop music world that is infatuated with pop culture, Trevor Drury dares to be different. His new song “Alice” is a complexity of honesty, riveting beat and lush, dreamy string arrangements. That’s not even half of it – Drury’s vocals bond together movie-star good looks and sensitive artistry. “Alice”, a song that Drury dreamed up after seeing an abandoned rail car, delights and entertains his audience incessantly. A grand statement, a subtle glance and a nocturnal element, this song settles in and leaves the listener a long leash to explore.

Drury’s pop rock tune starts and ends with many questions. The first of course, is Alice, a woman, a stranger or even a loved one. I’m not sure that Drury ever answers it. I only knew of his inspiration from reading a quick excerpt of his biography. “Alice” is from his second album Alice It’s All In Your Head, and he came up with the song while filming the music video for his single, “Head on the Tracks”. His vocals are clear, with a few moments where he murmurs the words. He digs deep when he sings, as if he were exhaling years of disappointment and stories to share with the world.

While listening to “Alice” the mood is futuristic. Still I felt tethered to the present, and perhaps it was the string and a guarded piano, but the melodic toll these instruments evoked made me think of classier times. Again, that word grand kept coming back into my brain. Even when he’s singing a lower tone, it’s as if he’s calling the listener closer and closer to share a secret. It sounds bigger than it should and because it’s Drury, it’s going to be magnificent. I feel the same way when I hear Bono sing – like each lyric is a special letter that must be delivered precisely, or the meaning will change completely.

He balances out the yearning for nostalgia and memories with the song’s rhythm. Forward and in a straight-line motion, the music bed doesn’t throw off a cyclical vibe. Trains and tracks would easily be inferred in the storyline and while Alice can easily be any one of us, I suppose it could also represent time. What is the point of it all, he seems to say between the lines. Is this all just one long train track that we’re all waiting for our last stop. The stirring strings, a reminder that the beauty in life is all around us, folds into the pop /wavelengths that vibrate throughout. I think when you listen to an artist like Drury, one of his main appealing characteristics is that his voice is timeless.

You can’t just drop him in the 40s or future music and not feel like he’s been there all along. He has the crooner, the jazz bandleader, the pop star and the folk singer running throughout his essence. “Alice” is a new favorite of mine, as is Drury. Daring to be different is the way to go for an exciting artist such as him.

User Rating: Be the first one !
Share
Previous Give Your Music Wings With Song-Angel
Next Juha Jyrkäs “Hämärästä aamunkoihin” (SINGLE)