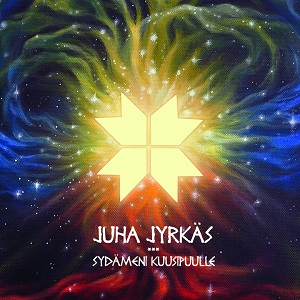 The first thirty seconds or so of the new single “Hämärästä aamunkoihin” from Juha Jyrkäs initially bewitch us with ambient themes that seem like they could go on for an endless amount of time, their textural presence commanding so much of our attention that seemingly not much else could match the physicality of the intro.

As we listen on, it quickly becomes obvious through the Finnish verses and the neo-operatic fashion in which they’re delivered to us that this is to be far more than a meditative drone; we’re listening to something puritanical and poetic, derived from much of the same raw source of emotion that the ancients once borrowed so much from in their quest to shape, define, and essentially provide parentage over art as we know it. The superiority of the tonal detail in this effort would have been more than enough to make me into a Jyrkäs fan, but when partnered with the technical skill he puts forth beside his two studio collaborators in this one of a kind performance, I don’t think there’s any other way to say it – “Hämärästä aamunkoihin” is a powerful song you just can’t miss out on this month.

You don’t have to speak the Finnish language with any sort of true comprehension to understand the narrative at hand in this single, but instead, only feel something within your spirit when it comes to the subject of depression. Juha Jyrkäs crafts the story here through lyrics that could be perceived as either introspective or observational – “My day doesn’t know the night / For a joy the sadness is a stranger” – and the passionate underpinnings we discover around every turn are rarely limited to the output of his verses alone.

This is a message of hope, a bright ray of sunshine at the end of a dark tunnel, although it’s offered to the audience with a certain strain of gothic melodicism in the background, scarcely is there an instance within “Hämärästä aamunkoihin” that feels anything other than affectionately supportive, especially when deconstructed in the most basic of ways. Jyrkäs had a lot on his mind when he was writing this, and I believe this to be evident no matter who is sitting on the other side of the speakers.

I was not fully aware of the talents Juha Jyrkäs was in possession of before I sat down with “Hämärästä aamunkoihin” for the very first time just this past weekend, but now that I’ve been properly schooled in what his work is all about, you can bet on my covering his future releases from here on out. We need more of the thematic approach he brings to an international conversation about depression in this single, and while I wouldn’t say this is the only effective piece of its kind out this summer, it’s definitely one of the more assertive and multilayered to have come across my desk.

A spike of sadness inflicted in the wake of last year’s pandemic can only be quelled with the addition of thoughtful songwriters in the public eye, and it is in this sense that both “Hämärästä aamunkoihin” and Jyrkäs’ artistic direction in general feel like right for this moment in history.