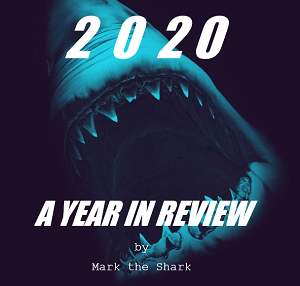 2020 was the most unpredictable of years, but if you think it was without one heck of a strong soundtrack, you definitely haven’t been keeping up with the Indieshark release radar in the past twelve months. Aside from incredible mainstream sounds from The Weeknd, a maturing Taylor Swift, the compelling Will Hoge, and posthumous works from Juice Wrld that could be regarded as some of the best crossover hip-hop released in a generation, the American and international undergrounds were on fire from January forward. As most are aware by now, Undeaf by the incomparable Hēran Soun definitively took home the AOTY fin, but here we look to explore some of the other amazing content that made 2020 such an important year for audiophiles.

This past February, one of the first great indie singles of the year rocketed its way into my playlist courtesy of Moran Mallory and has yet to depart from my daily listens – in “Bullet,” this pop singer/songwriter straight-up elevates himself to the big leagues with a hook worthy of a standing ovation. One of the best vocals I heard in 2020 undoubtedly belonged to Desmond Myer, whose single/video combo in “Playing With Fire” instantly became a favorite for breakout release of the year upon my first giving it a spin. Blxpltn’s “Zzeerro (Dying for You to Get Rich)” and Proper Einstein’s “Like This” remain two of my favorite videos of 2020, and in some ways they represent the extremes of minimalism as they’ve been refashioned for a new chapter in the history of western music.

While I might not have heard Chords of Eve, singer/songwriter Anthony Quails, Ancient Whales or Izzy Outerspace before the start of this year, each of these acts made my list for best new artists of 2020 without any debate this December. Chords of Eve’s sexy Dear Engineer EP lit a fire that has burned particularly bright since its arrival, and if they’re able to expand upon the sound that they’ve introduced us to in its five songs with a proper LP in the next year, I haven’t any doubts as to whether or not they’re going to be frontrunners for the 2021 AOTY fin. Moxie is everything in this industry, and when combined with charisma, it results in tracks like “The Future’s Not What It Used To Be” getting stuck in your head for months on end.

If there is only one album that you listen to in 2020, it needs to be Undeaf – that said, there’s absolutely no excuse for listening to only one full-length in a year that has produced premier cuts like I.Am.Tru.Starr’s lo-fi rap masterpiece Viva, Tatiana Eva-Marie’s uncompromising Bonjour Tristesse, The Brothers Union’s Pain and the Opposite, Cinemarty’s Death of the First Person, and Thomas Charlie Pedersen’s Daylight Saving Hours. Whether experimenting with the limits of genre or simply the parameters of their own artistry, there isn’t a single player among these acts that didn’t deserve to win Album of the Year; in fact, I would say their arriving at the same time as Hēran Soun’s smashing new LP was a divine coincidence gifted to music lovers in a nauseatingly uncertain period that was already going to rob us of countless live concert experiences.

Every month of 2020 has brought forth a new record, single or music video worth spending a little extra time with, but there are certainly a few records from 2019 that I felt like I had to mention in this yearend editorial simply out of respect for their consistent listenability well after their initial release. Cracking my personal top 3 are Derrick Davis’ throttling sophomore effort Anti-Social, Roses and Cigarettes’ unexpected swan song Echoes and Silence, as well as Speakea5y’s breathtaking EP Circles, the latter of which I eagerly await hearing a sequel to (hopefully within the first half of 2021).

There’s still a lot we don’t collectively know about what 2021 is going to look like for live music, but with a litany of fresh records slated to debut in the next few months alone, you can bet everything in your bank account on the next year sounding as spellbinding as this one has for indie music buffs around the globe. Trends in surrealism and atmospheric melodicism seem to be waning in favor of something a bit more focused and visceral among pop musicians, but if there’s anything that I would anticipate hearing in the next year as a result of quarantine culture’s influence, it’s a continuous insularity in both composing and mixing that is sincerely reflective of the times we’re living in.

No matter what the soundtrack of 2021 consists of, stay locked in to Indieshark for the premium leads on where the underground’s hottest beats are coming from. The aforementioned content makes for one amazing pandemic playlist, and while none of us like staying cooped up inside, artists like these are finding a way of making even the darkest of times just a little easier (as always).