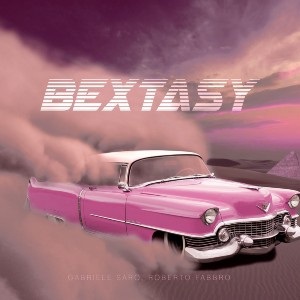 Many times when we’re immediately entranced by a newly discovered song, our first thoughts lead to the often said “Wow, I’d love to hear this live.” I can wholeheartedly say that “Bextasy” and “Dangerous Running” by Gabriele Saro & Roberto Fabbro are songs that demand to be heard live. Italian resident Gabriele Saro prides himself on the combination of his scientific and rational side and his artistic and creative side. It’s very evident in his clean and clinical production that gives it and element of a certain effortless behind the scenes.

The songs ooze a confidence that only come from a seasoned musician. Saro has a masters degree in film music, and despite the traditional sounding Rock and Bluegrass inspired fare, it has palpable elements you’d see in a film score. Particularly a masterful sense of organic escalation and a densely layered sound making each listen a reward as you pick up on things you didn’t notice previously. With the female led power ballad “Bextasy” we’re painted a sonic tapestry of a woman dealing with a crazy lover(?) whom she wants to cut loose to live and thrive, letting us know she’s “still alive” while an exciting electric guitar. It’s the kind of song that lets you know what it’s here to do even starting with a glass shatter demanding your attention. Italian Rock started after the defiant rejection of melodic ballads that were commonplace before the 60’s rock movement pioneered by the US and Britain became popularized. Saro and Fabbro certainly evoke sounds similar to other iconic groups like ZZ Top, Leonard Skynard with hints of Creedence Clearwater, but the end result is completely original. The songs momentum never falters evolving from its steady drum beat and slick baseline only emphasizing the singers feeling as she croons she’s “tired”.

It quickly kicks into overdrive with electric guitars and some truly impressive mixing with a notable uses of echo that never truly draws attention to itself. “You’re crazy and I’m free, I’m in Ecstacy” she sings as all major instruments join together. My only major complaint with this track and its follow up “Dangerous Running” is that sometimes its a little difficult to understand lyrics clearly. I’m not certain if it’s due to the difference in language, or a deliberate part by the musicians to focus more on mood than lyrical content. “Dangerous Running” was my personal favorite of the pair. Though it suffers as the same issue as “Bextasy” with some noted difficulty deciphering lyrics (“Dangerous Running” is more guilty of this), it’s hard to deny the songs potency based on how infectious it is.

As mentioned earlier, Saro studied film music and it certainly shows in the structure of the songs, and its boosted by the fact that both of these tracks would certainly fit an action soundtrack perfectly. 2020 has been a devastating year for live musical acts, but once things return to normal, Saro & Fabbro are a pair I can’t wait to see bring their exciting flair to an enthusiastic crowd.

The music of Gabriele Saro & Roberto Fabbro has been heard all over the world due to the promotional services offered by Danie Cortese Entertainment & Publicity. Learn more here – http://www.daniecorteseent.com/