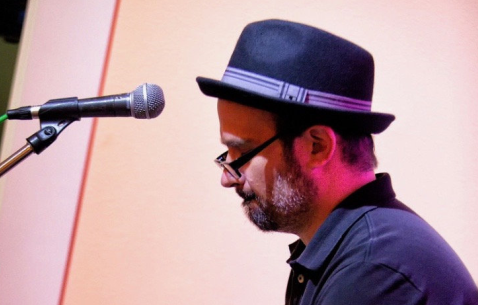 How would you classify your music or this new album?

I describe the music on this record as “epic folk ballads”. I write with elements of pop, folk, jazz and rock, so it’s a complicated answer.

I listen to a bit of everything, but I think the work of David Bowie, Stevie Wonder, Paul Simon, Ben Folds, & Neil Young have all left their mark on my compositional preferences.

I want to connect to listeners on an emotional level. I hope they can relate to the universal concept of love across distance and time, which are the album’s primary lyrical themes.

Austin is saturated with absurdly talented musicians, and this is both a blessing and a curse. I could write a whole article on the subject! There’s plenty of work here for those of us that are up to the job, but the bar is high and the gigs limited.

I think the Flaming Lips put on a fantastic show. I’ve only seen them live twice, but both experiences were inspiring and engaging. My favorite thing about playing live are the moments when I feel like a conduit for something divine. There are sometimes these magic fleeting moments of improvisation that happen onstage, where the air feels electric. I chase those moments that are bigger than my ability, when I’m just a vessel for the music.

“Synecdoche” is currently my favorite song off of my album. I’m very proud of it both lyrically and musically. I also love the string arrangements and the dynamics of the performances on the track. It’s an abstract, Quixotic concept, and it’s not a very commercial song- there’s no chorus! I really thought I was just writing it for myself and that it wouldn’t make the album. So the fact that it’s on the record and it came out so beautifully makes me extremely happy.

I’ve learned to embrace my strengths and I’ve accepted my limitations. I think a lot of artists have this moment when they realize that they can’t write like their heroes and influences, and they just have to be themselves and write whatever that may be. Making this album helped me surrender control and just write what is right for me.

I’d love to have a conversation with Ben Folds. I’m a big fan of his work, and I have so many questions about how to go about navigating this industry from another quirky pianist perspective. Plus he seems very funny and like he’d be an entertaining dinner companion.

I plan to start performing the album live and touring it regionally around Texas starting in the Fall. I’m also going back to the studio to start the next album next month. Then, when it comes out, I’ll start another, and so on and so on. So it goes.