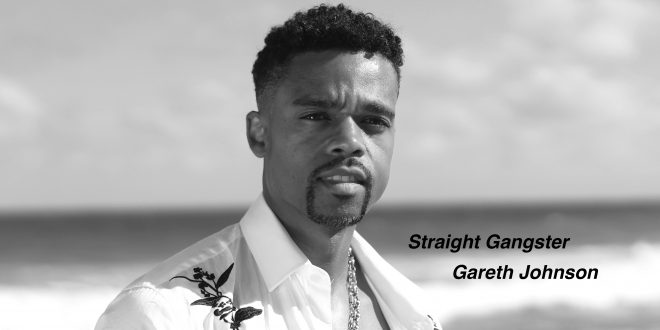 Gareth Johnson: “Straight Gangster”, A Violin and Hip-Hop Immersion ” You Have to be Cool Enough to Make People Feel Cool”

Violin Virtuoso Gareth Johnson has just unleashed his violin/hip-hop infused single “Straight Gangster,” making him the Grandmaster and architect of a brand-new genre. Johnson is the very first hip-hop/R&B/pop artist to produce and write and perform this music.

Passionately inspired after hearing Itzhak Perlman at age ten, Johnson bought a violin with his birthday money. His classical studies with master violinists for two decades have brought him countless scholarships and awards, concert performances all over the world, and performances with Joshua Bell, Itzhak Perlman, and Pinchas Zukerman. He has become a master teacher himself teaching and performing in South Africa, England and the Netherlands.

His mom, Linda Johnson, who has a doctorate in music education herself said, “His God-given talent belongs to the world not a single individual person, or place. He cannot hide that talent for any reason. His passion, creativity, and unique sound must be let out into the world.” …and that it is in a most unique fashion….

I spoke with Gareth regarding his career, and his desire to connect all musical genres from artists like Johnny Cash to Stevie Wonder, to Metallica, Guns & Roses and Bruno Mars. He has ventured into a musical journey where no man has gone before with the production of “Straight Gangster.”

How old were you when you started playing the violin?

You’re not that old now, it doesn’t seem that you’ve been playing long enough to be that good. Do you practice every single day?

Thank you I appreciate that. I practice, I teach. Teaching has made me a much better violinist because it’s about trying to get something that I want out of other people that makes me be able to do what I want even easier.

When I was a kid, they made a bunch of us play the violin. The sounds in that music room were horrible. How do you stand to listen to that while you are teaching?

Oh yeah. For some reason it never sounded bad to me. My mom has a doctorate in music education. She just kind of told me to do this, or play here, otherwise it would sound bad. She would always make sure it sounded good, and her instrument is piano. Any musician that had a pianist parent musician like Bach or Beethoven, Mozart, you develop an ear because that piano is never out of tune. A piano is always going to be right in tune playing perfect chords. I had to always play along with the piano. My mom would practice with me, even when I was young, I would be practicing three or four hours a day. She made me practice at least two hours a day.

That is a lot of hard work for a young child.

Oh yeah. She took me up to the Juilliard pre-college program in New York City to play with Dorothy DeLay, all over, wherever the best training was. They weren’t playing around. My parents weren’t playing.

So you didn’t have a choice?

I chose to do it in the first place. They didn’t want any of their sons to be musicians. My parents had three kids and they kind of just let us do what we wanted. But they weren’t gearing us up to be musicians. That’s for sure. My dad is a pathologist and my mom a Doctor of Music Education. She retired early and raised her three boys. We’ve all done very well.

Are you all musicians?

No. My oldest brother is a scientist and the middle brother is a businessman with Merrill Lynch. We’re an interesting group. We all go our own way. I heard Itzhak Perlman play when I was ten years old. I didn’t plan on playing the violin at all. But I heard him play and I just knew that I could do it. I bought one myself. Nobody could really stop me from buying it. I just bought it myself with my birthday money and I could play it. Especially with my mom. She wasn’t going to let me just sit there and fail at it. She realized I was really talented. So, we just kept going with it, the lessons. As I told you she took me the best places in the country.

You are very inspirational.

Without the inspiration in my opinion we are continuing to kill the art. It is just going to die off.

At ten years old it’s not all that cool to play the violin. How did your friends and peers treat you?

I was just always kind of a leader. I guess because I was one of the only black kids in a pretty much all white school. I am a well-spoken guy and it’s not like I was coming from where they didn’t want to be. They liked me. My parents were both doctors, I came from a good background, so I was very well respected. Having two older brothers as well to lay it down and let everyone know we were all cool guys. So, playing violin for me was like me taking on a leadership and developing a unique skill that only really, I had in our area. There were no strings in our area south of St. Louis.

Have you ever heard of the “Two Cellos?”

Oh yeah, I love the “Two Cellos.” That’s the type of inspiring music and art that we need. They are very original. They are coming up with their own things. They might use a little bit of the old stuff but that’s just to make it a hit thing. They know what they are doing. They are doing very, very well and I’m proud of the young creative musicians like that. I think that’s what the Mozart’s and the Beethoven’s would have been doing today with the modern technology that we have today. They had to make an impact on the world. They would not have been doing something that they were doing 300 years before. Mozart would not have been doing something they were doing in the year 14 something. This new stuff, that’s what it’s all about in my opinion. That’s what I respect. “The Piano Guys”, I don’t know if you’ve heard of them?

Yes, they are great.

You have to check them. It’s getting to be the new thing. I love all these groups. “The Black Violin” group are one of the first that started this. To me they’re playing skills could be better. I think that’s why it hasn’t really blown up that much. Just a straight violin hip-hop aspect of hip-hop violin. I’m really looking to establish myself as a hip-hop violinist. I don’t think it’s been done very well yet.

I haven’t even heard of it yet…I think it’s the coolest thing.

This has been quite a process for me I learned in making this transition if you can imagine. From being a classically trained violinist and playing things like Beethoven and Mozart…. I won national and international awards. That’s what I did, that’s what I do. What is a hip-hop violinist?

That’s a really good question so I’m going to throw that back at you…what is a hip-hop violinist?

What are you going to do? There are no words. You can’t rhyme. What are you going to do really, what’s the answer to that? So, the best answer to that in my opinion is a track that I made called, “Straight Gangster.” Why would I call it that? Because after you hear that track you won’t ask that question again. It’s only violin. There’re no words but you will say, ” Oh yes, he pulled off “Straight Gangster” on the violin.” That is some of the first original violin hip-hop. I’m trying to establish it, and I think people are going to realize it’s the new genre.

I think you just made that new genre.

A lot of people have heard those three tracks on my website, and all my other tracks as well but when they hear “Straight Gangster” they say, “That’s my favorite….something about that.” That’s my true style. I didn’t let anyone have any influence on how I wanted to produce that track. People suggested a lot of things but I said “no, this is how we’re doing it.” This is purely what I think hip-hop violin should be. There aren’t really many beautiful melodies in it.

You have to be cool enough to make people feel cool. That takes something special. Honestly, I don’t think I could do it with words, but with my violin, that’s where I have it.

Let’s say Eminem wanted to collaborate with you?

That’s what I’ve prepared my whole life for. I’m ready. I think when he hears this track, he will realize this poor guy, he was where I am. Marshall Mathers, he brought a whole community up with him. As soon as he got signed, he started calling all the people who helped him. That’s me all day long. I’m not going anywhere by myself.

BRIAN TELL AND THE LOVEMAKERS