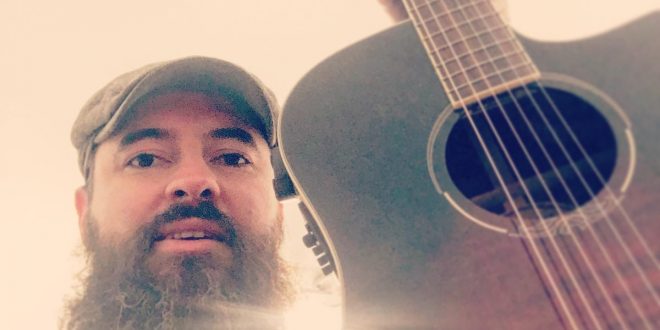 I guess since I can think. There are baby pics of me with toy guitars and drums and harmonicas. Music was always in my life.

A mix of some early 90s rock like The Offspring with some outlaw country heroes like Johnny Cash, but also some great storytellers like Mark Knopfler but also the classic country-rock acts like Eagles or CCR.

I live in Vienna, Austria – best known for classical music or indie-singer-songwriter-folk, so I guess I’m in the wrong city with my music, haha! But I’m trying to see it more like being an outlandish pioneer working hard to get noticed in Austria. Thanks to the internet I can reach out to many other country-rock fans all around the world.

It’s hard to decide and I’m not sure if it’s my favorite but one that I’m especially proud of is “Sweet Codeine”. It’s the calmest song on “Smile When You’re Wasted” and musically it’s super simple but I like the relaxing flow of the melody and the lyrics are a bit more poetic than the other lyrics on the album. That was a new songwriting approach I tried and I’m proud it worked out pretty well.

Blackberry Smoke at Flex in Vienna, Austria. Spotify put one of their songs on my Discover Weekly playlist and I streamed all their albums that were out at this point. I spent half of the day on researching everything about that band and found out that their coming to Vienna two weeks later, so I bought a ticket the same day I discovered them and two weeks later I had a few beers at an amazing show. That was pure country-rock’n’roll!

Well, of course all of the already mentioned influences or acts I was listening to in the last few months but it would also be great to collaborate with somebody from the pop genre. Maybe someone like Lady Gaga or Ed Sheeran. You know, someone who’s not also a great singer but also a great songwriter.

I’d love to play an extended US-tour at least at mid-size venues and one of my biggest goals is to write a real evergreen. You know, something like “Proud Mary” by John Fogerty or “Knocking On Heavens Door” by Bob Dylan. Something that will be played on the radio for decades and covered by almost everyone, haha.