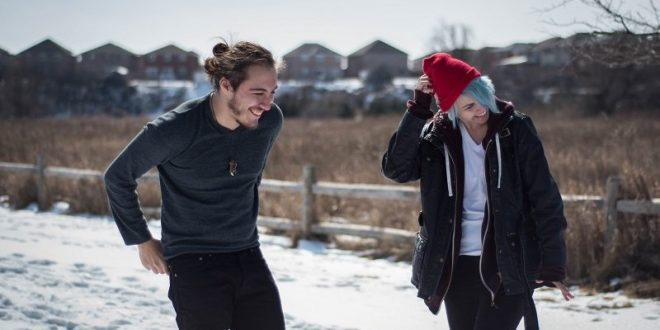 There are so many musical labels that get thrown around now that its very hard to actually know for sure what you are.  Some people call us indie rock, some people say indie pop or indie folk.  At the moment we would like to think we have a blend of the three but we would eventually like to lean more towards the indie rock/alternative side

We are both so different when it comes to music.  Our influences are Paramore and Tegan and Sara (Holly’s favorite bands) and Fleetwood Mac and the Smiths (Matt’s favorite bands).  In general though we don’t sit down and write a song and think “this song has to sound like Paramore!”. We write music that we both love and because our listening tastes are so different we have to make a lot of compromises.  That being said, writing together is easy because we end up creating music that we are proud of.

We want our fans to put the songs into their lives. Instead of saying what we wrote them about, we like to keep it a mystery, because they can really apply to anyone and mean so many different things.

We definitely can’t complain about the Toronto music scene.  It’s treated us very well this passed year and hopefully it continues.  It’s amazing how in such a big city with so many artists and bands people all seem to know each other!  It’s such an interconnected scene and that’s what keeps it fairly strong still.

The best concert we both saw together would have to be Against Me! at the phoenix. Everything from the energy on stage to the lighting made it a great show. We get so nervous on the lead up to a show but when we get on stage it all goes away and we just feel so comfortable and it so amazing to see the crowd reacting in a positive way. It’s such a natural high. It doesn’t get any better than that!

Our favorite is definitely “Tidal Wave.”  This album is somewhat of a compilation of songs we wrote together when we first met.  Its more like a musical resume.  We’ve grown a lot since writing those songs and “Tidal Wave”, along with “June 8th”, were songs that stuck out to us.  When we wrote them we stopped for a second and thought “this is what we want to sound like”.

We have been evolving since the day we met in August of 2015.  We’ve both become better guitar players especially since Matt used to play rhythm guitar before the band started and now plays lead.  However in a year exact we have been blessed enough to play a few pretty well known Toronto venues which inspired us to play better and better every time.  Our live set has gotten exponentially better as a result.  And finally, we have gained a lot more drive over this year as our gigs continue to get bigger and better.  It really gives us something to strive for.

Matt: Lindsey Buckingham.  Hands down the best guitar player.  I never had an interest in becoming a great guitar player until i heard him play.

Next is recording a new album!  We are heading back into studio to record our 2nd album.  We are extremely excited for everyone to hear our new songs.  We have really found our sound this year and we hope everyone will love it as well.  That being said, no release dates have been set so you’ll have to keep track of our social media to find out.