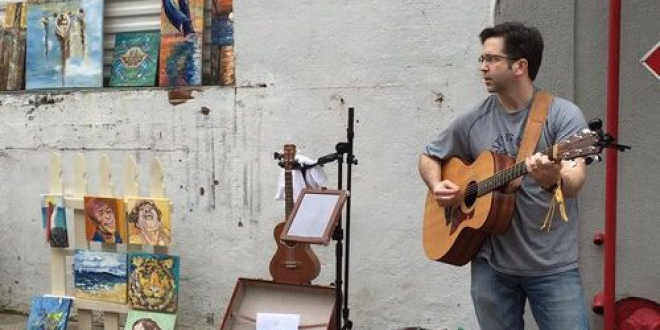 My music is Americana folk with a rock underbelly — although record stores and some online shops seem to place me in Country. That’s fine, too. You’ll hear musical elements of folk, gospel, country, R&B, and rock.

My earliest music influences were John Denver, quickly followed by Lennon / McCartney. These days I’m moved by Glen Hansard, the Avett Brothers, and Storyhill (aka Chris Cunningham and John Hermanson).

In my lyrics, I draw upon relationship, romance, family, strength, nature, heartache, and tenacity. I hope fans listening to my songs can apply their own life experience to the imagery in my lyrics and draw strength from that.

Atlanta is one big mixed tape off musical styles and genres. Venues from coffee shops to arenas cater to all artistic tastes and expressions. That means in ATL there is an audience for every musician.

David Gray shared a solo performance at the Tabernacle in Atlanta — just him on stage mesmerizing a full audience through the power of song and a passionate performance. That connection between performer and listener is also what brings me positive energy and is what I like best when playing live.

A few songs stand out for different reasons: Small Hotel is the saddest song I’ve ever written, and I do love a good sad song. Know What I Know is the rockin’est song I’ve ever written, and we captured a great ’70s rock sound in the studio. However, I have to say that Quiet Heart is the most personal song to me on the album, and we recorded the vocals as if I’m whispering a secret (which I am).

My first album was mostly folksy acoustic with confessional lyrics. As I worked on my second album, I’ve worked to evolve my songwriting for more storytelling with personal connections. I also broadened my style of music for more rock, gospel, and pop sounds.

I think that I would like to join a family dinner with John Denver to talk about songwriting and how he created such powerful emotion through often simple honest lyrics. I’d like to listen to him tell me about his songs and specifically about writing  Poems, Prayers, and Promises.

I’m going to keep being a student of songwriting, keep strumming, and keep finding joy in the song.