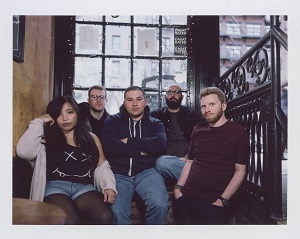 Hi Grayhunter! Thank you for speaking with me today!

You are getting ready to release your new song! Will you tell us a bit about it?

Our next release is an acoustic version of “Stranger”, which is the first single off our 2018 EP, Comeback Kid. Having just celebrated our 3rd anniversary as a band this year, we wanted to record a special tribute to the song that kick-started our journey together. This track features our frontwoman Reisha on the piano, performing and recording live at Engine Room Audio in New York City. We’ll also be releasing a video of Reisha’s performance in the studio.

Who inspired you to get into music?

Reisha: Music has always been a big part of my upbringing; I come from a long line of talented musicians, particularly on my mother’s side of the family. So getting into music was inevitable for me.

Richie: My mom. I was introduced to it very young thanks to her playing all the 80s and 90s hits on the radio.

Allen: My high school band instructor. He was sort of the embodiment of feeling joy through music for me.

David C: My brother, listening to the radio and our CDs in our room every single day made me want to pick up the guitar.

Dave G: The earliest memory of loving music was probably listening to the California Raisins as a kid. It was a half-hour literal cartoon commercial for raisins where the Raisins played motown hits. I remember it being my favorite cartoon even though it was a commercial, I was so jazzed when my mom bought me the poster.

When was the first time you recall thinking that you wanted to pursue music as your career?

Reisha: On the last day of high school. My math teacher told me, “Your parents are going to hate me for telling you this, but some dreams you gotta go after when you’re young.” It inspired me to give a music career a shot.

Richie: In high school, when I really became fascinated with music as a whole.

Allen: In my senior year of high school, when I really felt a connection to the study of music.

David C: I think when I started getting into Phish in high school was when I truly recognized that I would never be happy doing anything else as a career.

Dave G: “Career” is a very permanent word. I think of performing music as part of my journey in life, and I’m luckier than most to be able to do it.

Will you tell our readers about the origins of your band?

There are five of us total: Reisha (vocals), Richie (drums), Allen (bass), David C. (lead guitar), and Dave G. (rhythm guitar). Reisha and Richie went to elementary and middle school together. Reisha and Allen met at Hunter College, where they were both music majors. The two Daves joined via a Craigslist ad that Reisha had posted, searching for guitarists. They were actually the first two people who auditioned from Craigslist, and they proved to be a perfect fit for the band. We all became the official lineup for Grayhunter in May 2018 and quickly grew to be a tight-knit family.

What is your favorite song you’ve ever released and why?

Our favorite release so far is “Waves”, which came out in February of this year. It was our first release since our Comeback Kid EP in 2018, and we love it because it clearly shows our growth as a band and musicians, plus we had a much larger role in the mixing and production process so the song presents our creative vision more clearly.

Who are some of the artists currently inspiring you?

Our main musical inspirations are Pat Metheny, Rush, System of a Down, The Replacements, and Marianas Trench.

What are you hoping to see in the music world as it continues to evolve?

We hope that artists will continue to push their creative boundaries and that they will stay true to their art rather than what they believe other people want. The possibilities with making music are endless, and we hope that our fellow musicians take advantage of that.

Please let everyone know how they can keep up with you and your music!