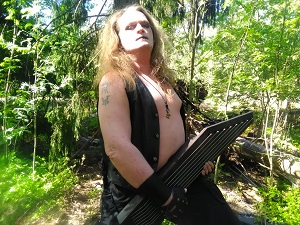 I call it kantele metal. I’ve also used the definition “pagan heavy metal with electric and bass kantele” for promotional purposes. Basically it’s metal music made with kantele, the ancient Finnish string-instrument. I’ve made the kantele a metal instrument: I use both electric kantele and bass kantele. No guitars, bass guitars or keyboards used in this project!

Basically I draw influence from folk metal, pagan metal, black metal, traditional heavy metal, Finnish folk music and Finnish folk poetry. And of course from many other genres and artists as well. I don’t specifically think about the genre while making music. I’ll let the music flow and come as it is.

1.) KISS. Since I was six years old, I’ve been listening KISS.That’s because of my sister, who was twelve years old in that time. Gene Simmons spitting fire and blood made a huge impact on me. KISS has always been “a larger than life” band for me. They have proved that you can do anything and break the rules in making good unique hard rock.

2.) Iron Maiden. Iron Maiden was the first actual heavy metal band I was fascinated with as a teenager. I like their way to write good songs thar usually are about famous books or movies. Steve Harris’ way to use bass is magnificent! Iron Maiden was also a gateway to the other classic bands like Metallica, Black Sabbath and Manowar.

3.) CMX. I want to top up this Finnish rock band into this, since their musical repertuare is very wide. They started with playing hardcore punk, but they evolved and added other musical genres into their music, like pop, heavy rock, techno, folk and progressive rock. Their lyrics are about folklore and different mythologies and they have many meanings. Specially their unique way of mixing different genres and their lyrics made the impression in me. Their lyrics can be beautiful, raw, mystical and catchy.

4.) Celtic Frost. I really like this Swiss band. They were the pioneers of everything extreme metal there is: black metal, death metal, thrash metal, doom metal etc. Their leader Tom G. Warrior is very charismatic person. Celtic Frost is also very good example that you can do very special music with your own terms and inspire the whole generation afterwards.

5.) Metsatöll. I lived in Estonia during the years 2002-2004. I’m fluent in Estonian, since the language is related to Finnish. At that time I went to many concerts and I saw this band, Metsatöll, performing. They play folk metal they way it should always do: singing in their own language, using traditional instruments, lyrics are about mythology and history of their country and the mix is with various types of metal. This band mainly inspired me to grab the kantele and to make similar kind of music myself.

What do you want fans to take away from your music?

I want my fans to have the feeling that they can do whatever they want. And I also want them to be inspired to be bold and open minded. My musical expression presents some of the unique aspects of Finnish music, I want them to find several other bands and artists around the world that make their unique music and sing in their native languages.

How is the music scene in your city, country?

To tell you the truth, I can’t describe Finnish music scene in a nutshell. I know, metal is big genre in our country. But for last ten years I’ve been more into my own musical endeavours and making more my own music, so I don’t have a clue what’s going on. In many cases I see myself as a loner, who makes his own music with own terms. I don’t care about the others.

What is the best concert you have ever been to that has truly inspired your live performances?

Definitely the concert of Finnish jouhikko metal band Kallomäki in fall 2019 in Helsinki. It was a gig I felt very energic. The real danger of a rock and metal music was present.

What do you enjoy most about performing to a live audience?

I enjoy when I feel the adrenaline burst in the stage. It’s the place I can do anything. I can give my all energy to the audience and then get it back to me. I enjoy playing a live. It gives me the feeling I’m living in a moment. The feeling that I’m a live and well.

Is there a song on your latest CD release that stands out as your personal favorite, and why?

All the songs are special to me, since I don’t do fillers. But if I have to pick some specific song that means lot to me, I’d say it’s Honkajuurella asunto (Where the Pine Roots Are). It’s about childhood traumas and mental problems. It’s a complicated song with many aspects that everybody can see from a different point of view. Musically it’s a mix of medieval rolk rock, psychedelic rock and extreme metal. It’s kinda like my “Stairway to Heaven”.

How have you evolved as an artist over the last year during these challenging times?

Yes, I have. In some way I’m grateful to COVID-19 pandemic, since it made me to promote my music in a different way I used to. It made me stronger, wiser more professional and more far-seeng than I was before. During the lockdown 2020 I shot all my music videos and posted them into YouTube. I learned myself marketing and started to promote my music worldwide. And now my fanbase has grown larger than ever before! I’m sure that after the pandemic, when I return to stage, the whole world is open for me. I’m looking forward to play all over the world in new places!

There are too many! Metallica’s Cliff Burton would definitely be the person I’d of course like to have a drink and chat with.

What are your future plans?

Currently I’m promoting my debut album Sydämeni kuusipuulle (My Heart is for the Spruce Tree), but I’m also writing some new music and making plans for my second album. My record label Earth And Sky Productions is also releasing a compilation album out of my old band Poropetra, so that’s the other project into this year. And also I do my work as an author. My new novel will also be published during this year.