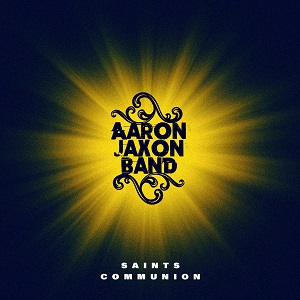 Aaron Jaxon’s first recording since 2015’s EP Light on the Inside, Saints Communion, marks the first time Jaxon has released a new album since he stopped drinking. It is a familiar tale of woe. Jaxon embraced a lifestyle early in his musical journey that had him often drinking any time he wasn’t on stage and, in relatively short order, Jaxon’s addiction spiraled out of control. He returns to the music world with a new mode of working imposed on his life, in touch with his creativity as never before, and ready to transmute a seeming tragedy into an unequivocal triumph.

Triumph is the right word. There’s an exultant mood pervading each of the album’s ten songs. “Legions”, the album’s first cut, is the sound of a survivor essaying heartfelt rock and roll. Blistering yet melodic electric guitar crackles in all the right places and the underlying Hammond organ fills out the band’s sound. It isn’t music attempting to break new ground. There are no dazzling neo-classical guitar turns, intricate musical passages, or other high-flown conceits – this is a song full of flesh and blood instead of pyrotechnics. It rejoices in its liveliness and invigorates listeners.

“Fire, Space, and Time” is cut from similar cloth. The teaming of guitar and organ is, once more, the musical foundation of the track. Jaxon’s lyrics are rife with near-Biblical imagery without any heavy-handed overtones and has a degree of playfulness. Keen-eared listeners will catch the “Pancho and Lefty” reference in the lyrics. He hits the mark once again with the track “Long Before the Sun” and has a whiff of fatalism surrounding its relaxed glide. Each of these ten tracks are constructed in sturdy surprise-free fashion but you find yourself sticking with them anyway because the musicianship is so high.

“Pentecostal Blues” has, arguably, the album’s best vocal arrangement. The choral scatting during the song’s opening sets a tone Jaxon and his cohorts keep going for a little over four and half minutes. It’s another upbeat track, as well – Jaxon, without question, envisioned Saints Communion with energy to burn and “Pentecostal Blues” fits the bill. The second half of the album has a softer edge, overall, than the first and “Engravings” is an ideal illustration of that. The supporting vocals may cause some division. They are recorded well, without question, but they have a forced quality that doesn’t comport with other parts of the song.

The album’s penultimate track “Noise in Your Nightmare” has elegance lacking in earlier tracks. The piano playing is responsible for that and the chemistry it establishes with the guitar is a key component in the song’s success. The elegance mentioned earlier never compromises the open-hearted vibe Jaxon aims for each time out and, impressively, this never neuters its obvious commercial potential. These aren’t songs for a niche crowd. Jaxon’s writing is top notch and has mass appeal without ever undercutting anyone’s intelligence. Saints Communion is a rousing example of what motivated songwriters are capable of and wildly entertaining to boot.