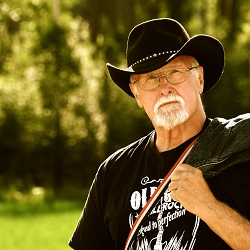 Super stoked to welcome you Lawson! Tell us a little bit more about yourself and how you got on this road of pursuing music.

I can’t say that I got on the road, but I can say that when I saw my first Roy Rogers movie in about 1952 or so, I knew from that moment I wanted to be a singing cowboy.

On Saturday evening I would turn on the radio and listen first to The Louisiana Hayride and when that was over listen to the Grand Old Opre. That was about the same time I began writing my own poems and lyrics.

However, for the next sixty plus years life just kept getting in the way but I never stopped writing. I wrote about all the places I’ve lived and worked around this great wide world. About seeing things and doing things most men will never get to do. And I got paid for it.

One thing that I’m always interested in, when I sit down and chat with artists or bands, is when or what their defining moment was that they knew that they wanted to be in music… What was that moment in time for you?

In early January 2016 I woke up and said to myself You have waited long enough and now it’s time to get that wish off your bucked list. So, I took 5 demos I had made of my own songs to a producer then he sent them to a record company then the head of that company called back and asked me if I had written those songs and had I written others? If so, how many? I replied I guess if I count the ones, I have finished plus the all the ones that I had started and not finished it would probably be well over a thousand. Then he asked me if I would be interested in record an album of my own songs and that’s the day at age 74 I became the singing cowboy I always wanted to be.

How involved in the single were you? Do you write all your songs and do you mix and master yourself or do you have an engineer or a producer that works with you?

The lyrics and melody are 100% my own. I am now working on my 4th album since 2016. All the lyrics and most of the melodies are my own as well. All I do is write and sing. Paul Gannon my producer and sound engineer does the hard part.

I am personally on a mission to get good music heard by everyone. What is one thing that bothers you the most about trying to come up in the music world today and, do you prefer being underground or, is the mainstream something you strive for?

I’ll Keep it simple. I have worked hard and gone to the top in just about everything I have ever tried except for marriage. After 4 attempts I’m still trying to figure that one out!

I have always worked hard, and I’ve kicked a few asses along the way in order to climb the ladder, but I’ve never bent so low as to kiss one

One question that I like to ask artists is, how did Covid affect your music in particular and the music scene in your area?

I don’t do music for the money I do it because I can and for the fun. So covid has certainly cramped me and my band as far as live music but it has also allowed me to devote time to work on a three-album project I have under way. An album of my own with twelve songs, An album sung by Lene Lie with twelve songs and a duet album with she and I

I grew up in the 90’s, I listened to everyone from Dr. Dre, to Weezer, to Pink Floyd, Metallica, Cypress Hill and back again. I truly believe that the 90’s were one of the greatest era’s for original music. Which era of music is one of your favorites?

Thank you for taking the time to chat with us today Lawson. Tell us where to find the new single and what we can expect in the future from you.

Share
Previous Cozi and Flounder “The Place” (EP)
Next TEYQUIL