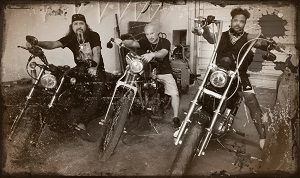 Very Happy to welcome Ryan of Little King back to our community. Tell us a little bit more about yourself and how you got on this road or pursuing music.

Great to be back with you…seems like we just released Occam’s Foil, but that was well over a year ago. Time flies when you’re obsessively creating music, I guess.

Amuse De Q will be the 7th release in the Little King catalog since 1997, which in and of itself blows my mind. WHAT HAPPENED?  I had a stated goal back then when we put out our first album called Transmountain which was to release 10 records. That’s what Zeppelin did!  I think I’m gonna get there…and maybe surpass it.

I’ve never been much for stereotypes or cliches, and I’ve tried to avoid being THAT musician. I have a career as a business owner/event planner for a long time and was a high school teacher before that. I’m a single dad and take care of my teenage son solo throughout the school year down in Arizona. So, while music has been an obsession and a necessary outlet, I don’t think these 7 records define me completely. They are just part of the tapestry.

One thing that I’m always interested in, when I sit down and chat with artists, is when or what their defining moment was that they knew that they wanted to be in music… What was that moment in time for you?

Hard to pinpoint ONE moment, of course. I grew up in the 80’s listening to a lot of 70’s rock, and my big brother was a formative influence on my listening tastes for sure. My mom actually bought me my first guitar when I was like 14 (a big badass black Takamine ax with a legit Heavy Metal body shape…so awesome.)  That helped.

I think when I was in the studio making Time Extension in 1998 it became clear that I was in my element. We had the good fortune to work with Mike Major at the legendary Sonic Ranch outside of El Paso…that place is a palace for musicians no doubt.  It made me feel like a pro at age 26, which already seems kind of old to be just making a 2nd album, but again, I had adult responsibilities of marriage/job/fatherhood to juggle.

But working with those pros in a setting unparalleled in studio settings in the USA was a pretty heavy thing. I wish I had been a better singer and arranger back then, but it doesn’t all hurt to listen to, 23 years later. Just half of it!

You have a new single and album on that way for that matter. Do you mix and master yourself or do you have an engineer or a producer that works with you?

We do! The album is called Amuse De Q and the first single/video is titled “Keyboard Soldier,” which drops on July 6 on YouTube, Social Media, and our web site at www.littlekingtunes.com.

I am NOT a mixing or mastering engineer and I have always preferred to let someone else twist knobs. Our engineer is also the drummer, Eddy Garcia, and he’s a TOTAL Pro. He owns a studio called Krank based  n El Paso, Texas, and Little King has recorded our last 5 releases with him (he’s played drums on the last 4.)  Ed is a beast…drummer and founder of Pissing Razors, former touring member of Ministry and Overkill. We work so well together, and he’s one of my dearest friends, so getting to take a few weeks to work with him every few years is a treat.

Ed has handled mixing and mastering for the last 2 albums, but we wanted to run it through some new hands this time. I brought Daniel Salcido (Plain White T’s, Disturbed, Avenged Sevenfold) to mix in LA and spend a few days with him at his studio, Command Space Audio. Daniel is meticulous, creative, thoughtful, mellow, and a good dude. We hit it off, and I think he made this album what it is. Just different perspective, different attention to different details, and he was quite a find. Very pleased with Daniel.

We then mastered with Maor Appelbaum, who has made a million records you like!  He had just finished a track for my friend Cesar Soto, the guitarist for Ministry who has a side project called Man The Mute, and it sounded great. I hit Maor up, he agreed, and after a bit of back and forth he finished Amuse De Q the right way.

I am personally on a mission to get good music heard by everyone. What is one thing that bothers you the most about trying to come up in the music world today and, do you prefer being underground or, is the mainstream something you strive for?

I wouldn’t say “bothered”…I am where I am, and I NEVER make music for the purpose of going somewhere else in my life. I like where I am at…if people glom onto the music, awesome. That’s incredibly gratifying! But there is so much out there, so much good and bad and noisy, that I can’t allow myself to worry about it.

If we are pleased, the world will find it and be pleased as well. And if they don’t? That’s okay, too.  My team of radio and publicists are great, and they seem to believe that this album is special. I hope they’re right, but I can’t really be objective, can I?  Tastes are fickle. Let’s just hope that the momentum from the last album carries over, and that those who haven’t heard us yet are drawn to the honesty, the musicianship, and the production of these 7 songs.

One question that I like to ask artists is, how did Covid affect your music in particular and the music scene in your area?

The entire album is about my experience in COVID Quarantine! The album title, Amuse De Q, makes reference to that.  Q is for Quarantine, but it’s also a play on the word Muse, as the Muse of Tragedy, Melpomene, makes an appearance on the cover and as the title of a short instrumental on the record.

I was horrified and morbidly fascinated, like everyone else.  Each song describes a moment or a scenario that came to the fore during the pandemic. Social Media, Protests and Political shenanigans, domestic violence, living alone in isolation, and sobriety. Those things were front and center as I dealt with COVID.

Touring was the plan in 2020, but that was scrapped. So…had to make another record, right?  Only natural, so here we are!  Melpomene is the Muse of Tragedy and Song…I think we did her justice. Also, the Q on the album cover is backwards, and I’ll let everyone speculate as to why!

I grew up in the 90’s, I listened to everyone from Dr. Dre, to Weezer, to Pink Floyd, Metallica, Cypress Hill and back again. I truly believe that the 90’s were one of the greatest era’s for original music. Which era of music is one of your favorites?

I grew up in the 80’s and the 1970’s to me were the pinnacle of popular music. Musicianship, production, songwriting, and the sheer volume of amazing artists playing live all the time. No computers to fix bad notes, and if you couldn’t play, you didn’t have a chance. My oh my how times have changed!

Zeppelin, Rush, The Who, Yes, Stones, Steely Dan, Talking Heads, Pink Floyd…these are my heroes, and they were at the height of their powers in the 70’s. What a decade, what a thrill it must have been to be a teenager in like 1978 when these groups were all CRUSHING IT.

Thank you for taking the time to chat with us today. Tell us where to find the new single and when the album drops.

The video and song “Keyboard Soldier” drops on 7/6, the next single, “Bombs Away,” will be out a month later on 8/6.  The album drops on 9/3/21 and will be available everywhere you find your fav music. Our handles are as follows, and you can always find out what’s up at www.littlekingtunes.com as we update that constantly.

YOU TUBE Little King Official is at https://www.youtube.com/channel/UC1W4gBPNUBFwJ30WjKB16lQ