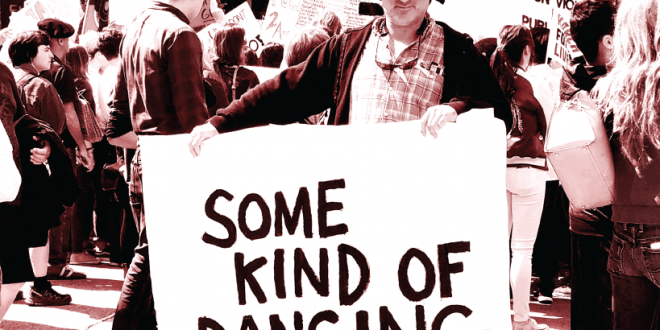 Getting hard to do that these days…. Americana, Rock and Roll

When I was a kid my brothers and I each got to spend a chunk of time listening to records on my grandfather’s record player with headphones. My choice was always Hank Williams. These days that old Nick Cave sure is giving me a lot to think about. Neil, Bob, MMJ, Shooter Jennings seems to be on a good run…. I’m fortunate to share his band…. Off the charts amazing band.

Truth of some sort.

“A Girl Named America” feels like a very timely song. Do you fancy yourself a political lyricist? A protest singer?

Some Kind Of Dancing is a protest album for sure… What are you gonna do? I’m a single dad and my kid means everything to me. I see a bunch of fascist goofballs chipping away at his future for their own short-term gain and I get upset. My preference would be to take them one at a time in a boxing ring… but, I write songs… don’t box much…. So, I’m punching with this music.

Two different songs from Some Kind of Dancing begin with the same lyric “The river is rising.” Is there a theme that follows along the entirety of the record?

Are you a fan of Springsteen’s classic, The River?

Obviously, a tough call. The River Is Rising works well for me – synthesizing music and words and truth – emotionally – sonically – they’re all speaking the same language on that one.

Neil Young. I wrote a song thanking him on this record. The Day Neil Young Died. A projection to that inevitable day in the future – inevitable for us all. I gave my grandfather a letter years ago thanking him for everything specifically that he gave me over the years. I told him I knew it might be odd, but I wanted to make sure I was real clear in delivering that deep message of thanks before he died. Same with this song for Mr. Young. I’m a big fan of letting people know how much you love and appreciate them before their gone

What’s next for Nate Smith?

Fishing with my son. Writing more songs as I go along – and hoping that they matter.