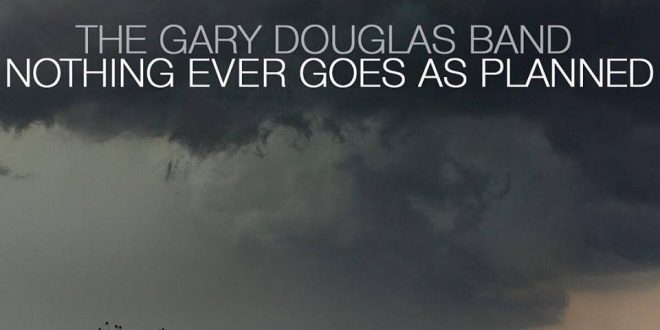 The Gary Douglas Band – Nothing Ever Goes as Planned (single)

There’s a steady turning-like effect to the new single from The Gary Douglas Band, “Nothing Ever Goes as Planned”, which has an almost chiming like sound at the start. The hypnotic sway of the song is lightly applied, never too overwrought, and the delicacy of the song’s acoustic treatment helps give it a gentle gait that draws you deep into its musical world. The recording gains a lot from focused production rendering the guitar in a surprisingly bright hue and placing the varied drum sound in an ideal context for the song to realize its potential. It’s the second and newest single from the band’s forthcoming follow up Deep In the Water and continues building on the evocative, introspective mood we heard with the opening single “River Road”. The sound here, however, is much different and achieves its effect through a cumulative process rather than trying to make its impact with a high point or two.

The well rounded songwriting is no fluke or blessed accident. Despite pursuing a successful legal career for a number of years, Douglas continued hearing music’s call and his talents clearly didn’t stand pat during the interim. It’s little wonder, as well, that Douglas and his musical collaborators are working at such a high level so early on; “Nothing Ever Goes as Planned”, like the other material from Douglas, has something it needs to say and the high stakes are audible every minute of the performance. The band’s increased emphasis on the drumming, coming in near the one minute mark, transforms the song in a positive way and it hits a natural peak with the gospel-influenced refrain.

Douglas makes no secret about his influences, but you’ll be hard pressed to find any outright imitation or mimicry in what he does. Instead, Douglas has taken those influences and filtered them through his own skills and passions to find something that’s in his own voice. This is so hard to achieve; some say there’s nothing new under the sun and there’s a certain amount of truth to that, but possibilities still exist truly individual voices can bring variations to long standing styles akin to pouring old wine into new bottles. Douglas and his band mates accomplish that here and it sounds as natural as breathing.

The song’s message isn’t very happy, often depicting a bleak and forgiving world, but there’s something undeniably life affirming about the transformative qualities of his voice, the backing vocals during the chorus, and the musical mood. Yes, there’s melancholy coloring these proceedings, but it never becomes an oppressive listening experience thanks to the balance so obviously important to the song’s success. The Gary Douglas Band are set to make many new converts with this new single and the upcoming full length studio album Deep in the Water; they deserve every bit of the success it brings. “Nothing Ever Goes as Planned” is relevant, timeless, and fueled by an unmistakably deep sensibility and love for making music. I’ve heard few songs in recent memory with such a satisfying result and sounding so sincere.