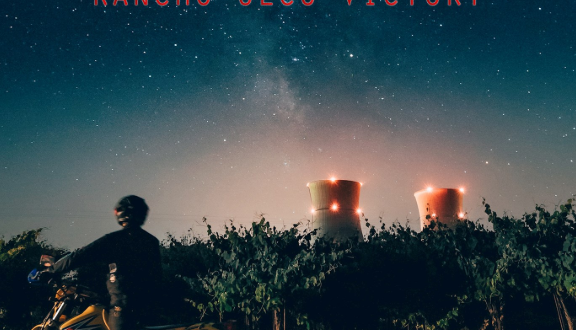 “Forlorn Cowboys of Nuclear Winter” opens Champ de Mars’ first full length studio album Rancho Seco Victory. In a bit of evocative misdirection setting a tone for everything following, the first track kicks off with moody sonic misdirection before settling into an airy, melancholy groove. The offbeat nature of the song reflected in its title comes through the arrangement and lyrical content as well. Elongated guitar melodies weave around lyrical flourishes of piano and the reflective qualities of David Bruns’ lead vocal. His gossamer light touch as singing helps give a dreamlike, incantatory flavor to this number. The band’s songwriting quotes Woody Guthrie’s famous bit of guitar graffiti with the second track “This Machine Kills Fascists”. Champ de Mars dispenses with the cumulative effects achieved by the opener in favor of a whiplash guitar riff crackling with immediacy. If Bruns and his band mates are looking to make vital music of the moment, a sort of songwriting call to arms, “This Machine Kills Fascists” is a knockout success.

The fat, relentless bass and percussion driving the brisk tempo of “45” is ornamented by guitar’s sharp accent. Alternating between terse rhythm lines and slightly dissonant rhythm flourishes, the song has a satisfying pay off with its bridge and the woozy glide of Bruns’ voice strikes a notable contrast with the arrangement. It ends on an emphatic note. “Memoriam for the Wall” is another composition conjuring the specter of current events for listeners; in this case the issue of a border wall between the United States and Mexico, but Champ de Mars plumbs the subject matter in an idiosyncratic manner and with a considered, deliberate pace.

We’re treated to another brief low-fi quasi-ambient introduction at the start of “Where Do All the Freaks Hang Out These Days?”The mid-tempo jaunt of the verses segues into a cawing, sarcastic quality coming through during the chorus as post-production effects distort the vocal into a near whine. Despite the project’s avowed influences, it’s impossible to hear this song and deny Champ de Mars has transmuted from those touchstones what has any value and found their own voice. There’s some assertive lead guitar laced through this song as well, but it never seeks the spotlight.

“Mono Stereo” shows off another side of Champ de Mars’ musical personality as they embrace what we might call a piano ballad. It has a windswept theatrical feel occasionally reaching towards interesting low-key grandeur and the sheen of keyboards intermittently imposing itself on the arrangement adds discreet splashes of color. One of the most improbably commercial tunes with the breezy and intelligent “God’s Favorite Redneck Bar” and it highlights Bruns’ five star lyrical talents as well with some surprising musical twists worked into the song’s second half.

“Nite, Nite, Frances” has the feel of a wild-eyed lullaby and some impressively dramatic drumming framing the song. The lyrics stand out thanks to their short lines, the familiarity of the tradition Bruns obviously references with his writing, and the surrounding musical pomp and circumstance never strains the listener’s patience, instead adding to the song’s dynamic sense of construction. It ends Champ de Mars’ Rancho Seco Victory on an appropriate note without ever risking self indulgence.

User Rating: Be the first one !
Share
Previous Oberon Rose – “No Stranger” (single)
Next Nate Smith