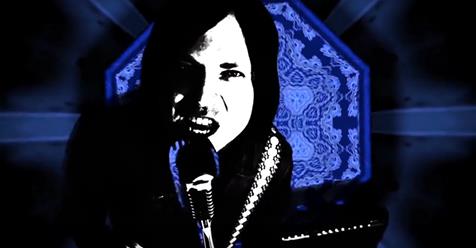 A grinding organ gives way to the coarse and violent strumming of a haunting guitar. At once all of our emotions are bottled into a singular container and shaken like soda pop; the frothing fizz leaks out and spills onto our hi-fi with an uncompromising scowl that can only mean trouble. Oberon Rose’s new music video “No Stranger” isn’t for the faint of heart or those looking to hate on analogue rock n’ roll, but if you’ve got the chops to see it for the staggering rip tide that it really is than its excitement is exactly what the doctor ordered. Neatly sewn together like an elaborate tapestry, the video for “No Strangers” guns after our subconscious like a mad hypnotist, and though it might seem like a risky idea I found it best to just absorb the band’s urgency rather than try and fight it.

As we lurch towards the first chorus in “No Stranger,” guitarist and singer Tommy Oberon teases us with a fragile hook that could shatter like thin glass if leaned against by the rest of the band. It’s acts as a sort of protective glass between Oberon’s vulnerability and the rest of the band’s stone cold delivery, but it doesn’t steal the show from the rest of this song’s well-crafted instrumentation. The drums are like a stampede and the bass like a truckload of bricks being dropped off of a building; there’s no getting in this band’s way even if you wanted to.

The main hook in “No Strangers” will get stuck in your head after a single listen and won’t let you forget about Oberon Rose’s cohesive gel both on and off the stage. People who have seen the band perform in person have walked away with all sorts of surreal commentary about what exactly they saw, and after watching the video for “No Strangers” I myself was curious to what exactly these cats would do if given a limitless amount of money to build a show specifically for their upcoming tour. Their creativity isn’t limited to the studio alone, and not dissimilar to Pink Floyd’s Roger Waters, Tommy Oberon strikes me as the kind of band leader who doesn’t see a limit to what he can do if given the platform to experiment.

At the 1:57 mark of the video the audience is assaulted with a blazing guitar solo that will make every little hair on the back of your neck stand straight up. The iconography of the spinning colors taking shape chases after the lead, and in this chilling moment we recall a time when rock n’ roll was dominated by axe men who relied more on their own abilities than that of computer software. Overall I think that Oberon Rose is still well on their way to superstardom and this is possibly their most accomplished and focused work to date. I don’t know if their music will overtake the pretentious hipster bands raking in the biggest market share at the moment, but in a few years I think we’ll be calling this music video and the album that spawned it classics of their own time.