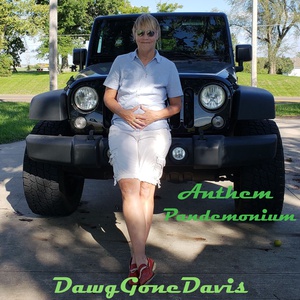 During the nine to five, she’s rocking the IT world managing the day to day workings of corporate America. But when she’s off the clock she takes on another identity – one of the Midwest’s most intriguing rappers and philanthropists. She is DawgGonDavis, and her new EP Anthem Pandemonium is going to teach anyone who hasn’t already gotten into her highly addictive style of melodic rap that hip-hop doesn’t always have to be serious in nature to make a big statement about life. I had the chance to spin the record, which is out this fall via Wolf Digital everywhere indie hip-hop is available, prior to its release and was left both hilariously impressed and actually taken aback by the talent this unsuspecting songwriter brings to the table.

Let’s talk about the title track from Anthem Pandemonium, which is accompanied by “Forever Music” and the highly successful singles “Butt on Fiya” and “Middle Age Woman – Hip Hop Style.” If you were expecting the eponymous song to be a rant about Colin Kaepernick, you better think again. Empowering and laced into an 80s style groove that is as atmospheric as it is danceable, the song wraps (forgive the pun) the listener in delicate layers of harmony while DGD spits out her own fiery brand of humorous verses. I wasn’t expecting this record to be as musically well put together as it is, but this song alone could be remixed at least a dozen different ways thanks to its strong bones (something I can’t say for her more hardnosed contemporaries).

Music that’s meant to be funny can still be rhythmic and impactful, and even when DGD is rapping about spanks and the “bitchin’ show” that her “rap n’ roll” sparks we can’t help but feel compelled to sync our movements with her beats. I don’t know why so many critics are quick to dismiss satire in hip-hop or any other genre; after all, it’s been artists like Frank Zappa who expanded the consciousness of pop through laughter arguably more than any others have. DGD isn’t looking to change the world, but she’s absolutely doing her part to keep it spinning using the only tools she can rely on – her quick wit and knack for making memorable rhymes.

I’m genuinely excited to hear what DawgGonDavis comes up with in the future, and if she keeps rolling out records that are this hypnotically listenable then she’s going to have a hard time maintaining the low profile that she’s kept as a member of the industrial white collar world. Hip-hop is a genre that you could say encompasses more styles and influences than any other in modern pop, and even though some might want to categorize DGD as a non-threat to the scene’s elitist figures, I don’t really think she cares much about that. She wants to make good music in support of a worthy cause – in this case anti-poverty charity Operation Breakthrough – and she’s doing just fine so far. She’s got my support, and with the right exposure her message of selflessness and good spirits will stretch around the globe.

DawgGonDavis’ music has been heard all over the world due to the radio plugging services offered by Musik Radio Promotions. Learn more – https://musikandfilm.com/