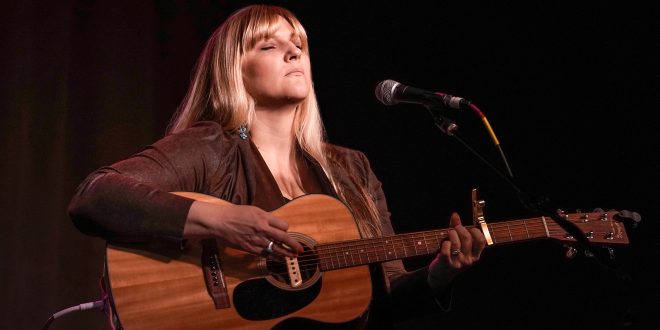 Thank you for being with us today Sarah! Can we begin with where are you from and where do you currently reside?

I was born in Miami and raised an hour northwest of there in unincorporated Collier County, in the Florida Everglades. To give you an idea of how rural it was, the land is now surrounded by Big Cypress National Preserve. We went to school and hour north in Clewiston, so that’s kind of like my adopted hometown. I currently live in a suburb of Buffalo, New York. My husband is from South Buffalo.

How long have you been making music?

I started playing guitar and a little bass in my teens. I wasn’t serious about guitar until college. I wrote songs back then but not too many. All these new songs coming out were kind of a surprise to me.

How many songs /albums have you released to date?

This is my debut album.

Your husband, award winning blues artist Robert “Freightrain” Parker recently produced your debut album Strawberry Moon.  Can you tell us a little bit about that experience?  And how you are enjoying the results?

I couldn’t be prouder of the album and people give rave reviews so I think we’re on to something. I think Strawberry Moon is a perfect blend of our talents. He has always had the ability to turn a good thing into a great thing musically but he exceeded my expectations with Strawberry Moon. In the studio, I was completely trusting in him and had little agenda so to speak about how the songs should sound, so he had free reign. He worked very hard to get the vibe of the song right and it was very interesting to watch him go through his process. I learned a lot.

How have you ended up in the music industry?

Well, I grew up with a charismatic father who loved music so I loved music. It was just part of our life. He was a hippie, heavily influenced by Bob Dylan and Jimi Hendrix. He was also a singer songwriter himself and taught me the magic in that. So, it was no accident I married into it cause’ it’s just normal to me.

What do you think of the music industry in 2018?

Well that’s a really interesting thing because there are serious peaks and valleys in the current way music is being distributed and consumed. I think it’s great that artists don’t have to sign with a record label to get distribution. But the flip side of that is there are so many thousands of artists flooding the market, it’s hard for the listener to wade through all that for quality. And the streaming is a problem because everyone does it and the smaller artist makes almost nothing. Why would you buy a CD or download my album if you can stream it? It not very beneficial for the independent artist monetarily. But it is the ways things are and we should be thankful for the exposure. On a different level, I think it’s really cool that genres are blending and that fans are consuming more music than ever.

Who do you think is the most influential artist?

On a global level, Lady Gaga. I think she’s cool because she’s a true artist and writes her own stuff. Now I know that she’s making some money off streaming, ha-ha! For me personally, I have been very influenced by Lee Ann Womack recently. I think artists like her are reinventing the Country/Americana movement. Real music for real people.

Who have you collaborated with so far in your career?

My husband and his band Freightrain just on stage and in the studio.

How do you think you differ from other artists?

I have been told that the nuances I use in singing are unique, but that might be true for everyone. I guess this is the hardest question to answer here for me. People tell me my music is authentic and real (also true for many artists) but only I can sing from my life experience and observation. I try to stick to what feels natural. Of course I am influenced by other artists but after many years I have found my own voice.

Dead or alive, who would be your dream collaboration?

Levon Helm. I have been listening to The Band a lot recently and his singing is just so cool. Just the epitome of effortless southern soul right down to his toes. He’s not thought of as a country artist but the nuances he uses are as country as green beans and squash. He’s the ultimate crossover artist.

What was the first album you ever bought?

Bon Jovi Slippery When Wet. Don’t judge I was 11!

What’s your favorite song at the moment?

Ashley Monroe is a country artist who has a new album out. She has a song called “Daddy I Told You” about her father who she lost. It resonates and really gets to me.

If you had to sell your music collection tomorrow, what album would you leave in your draw?

Linda Ronstadt “Heart Like a Wheel.” I feel like my mother had it on repeat play throughout my childhood.

What is your favorite saying?

“Lord Willing and the Creek Don’t Rise.” My father used to say that.

What other hobbies or interests do you have?

I have a couple fiction novels I would like to finish. I like to make up stories.

Do you have any tattoos or piercings?

Nope. My husband won’t let me get a tattoo, ha-ha. Piercings scare me. I didn’t get my ears pierced till I was 20 years old!

Tell us more about the making of your debut Strawberry Moon and a little about what inspired you to record this album?

The album started out with four songs that I thought were going to be like an EP. Then when we went into the studio and I saw what my husband could accomplish with them, I was inspired to write more. I wrote most of the songs as we went along over the course of the six months it took to make the CD. The title track Strawberry Moon was written around Christmastime after close friends had lost family members. It was recorded just after the Parkland shooting. I think we were absorbing everyone’s pain and putting it into the creative process. It’s obvious in the ethereal quality of that song.

Do you have any plans to tour?

We would love to. It’s tricky with a school age child at home but you never know what the universe has in store.

Tell us more about your upcoming project or this new project?

Well I am super excited to continue to get feedback from people about the songs. Which ones they like the best and why. Every song is like a child to me that has its own personality. Only I know the specifics and when they were born and how they came to be. So it’s very personal and rewarding to hear when people connect with the songs for different reasons. I love talking to people at shows and hearing their stories. It gives me more inspiration. It’s nice when people compliment me about my voice and singing abilities but I’m really in love with the songwriting. I come from a family of writers and in a way I feel like I finally fit in! I’m the proudest of the songwriting.

What’s in the pipeline after this project?

Believe it or not, I have enough material to do a whole new CD right now! The next CD is also going to have a country bent but will be a bit more autobiographical. I wanted to write more songs about my childhood and my father. He died suddenly many years ago but we were very close. It seems important to work the trauma of losing him and the life we grew up with out. He was a saw-miller and I wrote a title track about what that life was like. I am really excited about it.

Thank you for your time, and may you carry on making great, fresh music.

Thanks so much for taking the time to get to know me and my music better. An artist’s greatest desire is to connect with a genuinely interested audience. If the stories I tell resonate with them in some way whether it’s laughing or crying, it’s all worth it. I hope we have accomplished that. Best!