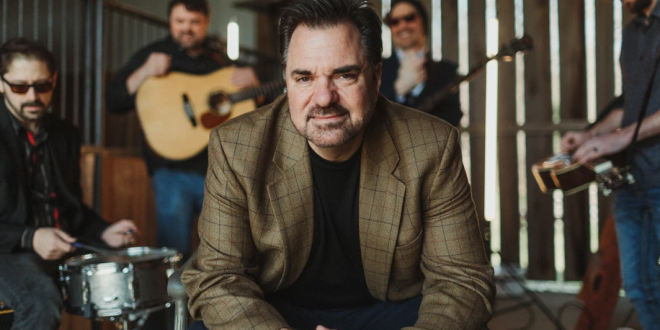 Steve Thomas has “been there, done that … and got the t-shirt”!. The gifted singer and multi-instrumentalist has been an in-demand side man for some of the top names in Country, Americana and acoustic music. He’s battled the demon addiction and come out on the other side. Now, Steve returns to his roots with a band of his own, Steve Thomas and The Time Machine, and new recorded project, All of these Years (Bonfire Music Group). It’s a little bluegrass, a little Americana, a little folk and more, and it’s pure Steve, one of music’s most stalwart and innovative entertainers.

With more and more styles living within genres, how would you classify YOUR music?

That’s a tough question. I’ve worked with dozens of top artists in Bluegrass and country over 35 years. I love it all. That said my early influence was fiddle music Kenny Baker, then bluegrass artists from the late 70s early 80s Tony Rice and Ricky Skaggs but I love James Taylor and Merle Haggard and blues artists like Stevie Ray Vaughan.

What do you hope fans to take from your music?

If my fans love traditional americana, bluegrass, blues and country my hope is that there itchwill be scratched. I hope that they have an emotional experience with the lyrics to my songs and that the music supports the lyrics appropriately. I hope they’re ultimately satisfied

When things are normal, how active is your touring schedule?

This is my first solo project and was released exactly when the country was shut down so honestly I have no reference to how the market would react to my music by being offered dates. I look forward to working as many as 100 shows a year but honestly that could take a year or two from now. Hopefully things will move faster than that.

What is the music scene like in your local market, and how does it affect or influence you / your music?

Well I live in Asheville and have worked here for a long time. Right now everyone’s in a holding pattern but the effect of living in Nashville for the last 35 years and working this music community makes that assessment in calculable.

The Eagles for the sheer content of songs that have become anthems growing up in America.

I love the challenge of playing the same songs over and over and making it real brand new every time. I love people, so having spontaneous emotional feedback is ultra gratifying!

Is there a song on your latest CD release that stands out as a favorite, and if so, why?

I love “Down In The Wildwood” For the emotional commitment represented in the song and for the pure fun of the groove that the band put down on this track.

How have you evolved as an artist/band since your last recorded project?

My last recording project was with her singing partner, Mark Newton and so I was there largely to support him. This is that my first time stepping out as a solo artist. It took quite a bit for me to convince myself to do it. I would say that was quite a bit of growth. After you’ve had some good reviews and sales which are nice confirmations of your labor it’s much easier to be confident. It’s the unknown and the fear of rejection that keeps us all from stepping out. So I am happy that I’ve been able to get my art out of my heart and head and into the market place with some success. It’s very gratifyin! 

I’ve had the luxury to work and play for many of my musical heroes so this is a hard question. Someone who I know casually and have even played with on stage at the Grand Ole Opry with is Vince Gill. I’d like to know him better. I’d like to get it to his head a little bit. I think he’s one of the greatest artists in several genres of my time.

How are you feeling about everything that’s going on in the world and the outlook for music?

The world has so much potential. So much talent. So many honest kind people. But I see less and less patience with each other. I think music has always reflected culture and lots of times the best parts of culture. It’s a break from the hardness of the world. It’s a place we can check out. As the lyrics are delivered into our hearts with sweet Melody the messages are often heard slow and sweet. I think music is very helpful in the hard divisive times in which we are living. I’m hopeful that my music might offer some space. A place to reflect enjoy and dream!

Share
Previous “Go Back Where They Came” (LP) from King Ropes
Next JTK’s new single “No Be Mouth (feat. Tunji)”