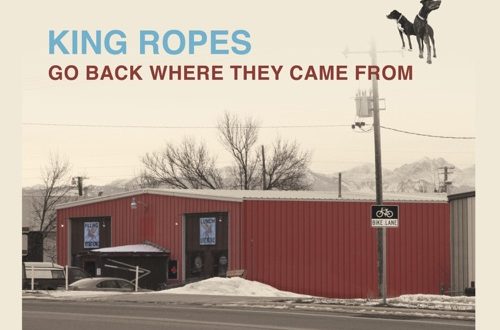 “Go Back Where They Came” (LP) from King Ropes

Go Back Where They Came From is the latest album from Montana’s King Ropes. Featuring interpretations of songs that have greatly influenced the band. Among the gems are covers from Ray Charles, Beastie Boys and even Arcade Fire. True to the spirit of the originals, King Ropes’ versions bring a fresh atmospheric rock element to all 12 tracks.

Originally named for a Wyoming saddlery store, King Ropes is led by front man Dave Hollier. The band is comprised of players all over the country, including Hollier’s son Sam in New Orleans, and daughter Lucy in Brooklyn. Now based in Bozeman, Montana, Hollier had previously lived in Brooklyn and Los Angeles before returning home to Montana. Go Back Where They Came from follows King Ropes’ previous releases Dirt , Gravity and Friction and Green Wolverine. The standout tracks on Go Back Where They Came From are noted below.

One of the first things you notice about “Rocket Man”, a song originally recorded by Elton John in 1973, is the arrangement. While John’s original version, nearly every can agree is legendary, King Ropes’ cover is spread wider, as if it’s a better depiction of the man living in space. Could it be the Montana nights, the Big Sky country sneaking its way into the final version? I think so. I think what Hollier is doing in his rendition is giving the audience a better feel for his own roots, his own isolating feelings in spread out Montana. It’s encouraging and refreshing to hear this song spun in a way that focuses on the words and not just a pantomime version.

In “Eilser On The Go” King Ropes take on the Billy Brag & Wilco song. What I liked most about the King Ropes version is the haunting guitar work; the music bed is more punk rock. Again, Hollier’s voice is cognizant of the isolation. To me, this song drives the idea of a wide swath of land to view each day and night is the stuff that showcases what’s it’s like to live in a state like Montana. Just as Willa Cather described the life of living on the Great Plains in her novels, “Eilser On The Go”  is its own love letter to the land.

“Girls Like Us”, originally recorded by Tandy in 2007, has a sweeter, crisper outing. Kings Ropes version has the vocals on a higher mix, and the Americana roots offering is intimately magical. Hollier and the crew give an almost sorrowful, sad rendering. On the surface, it’s just a simple acoustic guitar and Hollier’s poignant vocals. The more listens, the more this song transcends emotions.

I have to also give a shout out to “Song For The Man”. Originally recorded by Beastie Boys in 1998 on their Hello Nasty album, King Ropes’ song is wildly spaghetti western meets rock. I liked the little nuances, the little quirks and guitar riffs. I adored the trombone sections (Hollier’s daughter Lucy at the helm). Such a fun song and a cool spin on an undervalued Beastie classic.

Go Back Where They Came From Track Listing