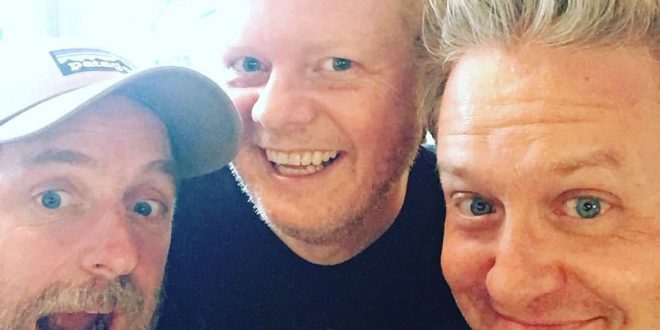 How young were you guys when you decided you wanted to play music together?

A decision requires a lot of thought and commitment. I think we just figured it was best that we play music together, but we’re not known for making great decisions. Shawn is my drummer for life. I’m not sure what I did to earn that honor, but it’s a decision I take seriously and reciprocate.

Shawn and I started a band called Poprocket in November of 1999. I was 29. Shawn is a few years younger than me. Our musical partnership has survived several bands and different musical roles over nineteen years.

If the music connects with someone where they can let go and dance, I think I’ve done my job. I work hard to write music that I feel deeply, and I hope that translates to others. It would be pointless if it didn’t. I would like people to feel something, and have the freedom to express that feeling as well.

Have you toured outside of the North Carolina area? If not, do you plan to behind this release?

The three of us have toured nationally together or in other acts, with a focus on the Mid-Atlantic and SouthEast. There was a time when Shawn and I didn’t have steady day jobs and lived off of touring.

But with that kind of lifestyle, we starved. We suffered. I told my pal Shawn that I would never ask him to do that again. This doesn’t mean that we are not going to tour, but it means we will think about smarter ways to make it work.

We’re hoping the success of the record will open doors where we can do “long weekend warrior” types of regional shows. Clubs are now much more receptive to us as they can see we work hard to promote our release, VOLUME and our live shows.

I’ve run sound sound at several clubs in town, and I know how much most bands make on tour. I don’t understand how a band can sustain themselves on $50.00 a night playing music. I think touring for weeks with no label support is a romantic notion, often embraced by the privileged.

Where did you get the concept for the trippy “Avocado?” It’s got a pretty different sound from the rest of the record?

I write several different kinds of songs. I’d put this in the “Stupid, Weird” category. I think one (“ah-hm”) band member is concerned with seeming like a joke band when we play a song like this, but I explained it thusly: there’s a fine line between what is funny and what is horrific. I’d like to explore that space within some of our music. A lot of the new material that I’m writing for The Eyebrows is in this vein.

When we were recording and mixing the song, I was listening to a lot of Cramps – so I think I was going for that kind of vibe over the B-52s type. But I’m glad it landed where it did. There’s a lot of fun stuff happening on that song!

One thing I always wanted to note is that the guitar is playing through an original 1967 MossRite FuzzRite – from what I understand, this is the first commercially made fuzz pedal, also heard on hits like Iron Butterfly’s In a Godda Da Vida. It’s the only song on the record using that fuzz pedal.

Did you all listen to the same kind of music growing up? Are your influences similar?

I think the one thing The Eyebrows has in common is that we were all thrilled when we first heard punk rock. Our influences are more the same than dissimilar from other bands we have been in. Shawn has been more of a 60s/70s Brit Rock, Bubble Gum Pop fan. I’m kind of stuck in 1982 art rock, but I like to devour all kinds of music – but it always seems to be on the fringe of what’s tolerable by my musical friends. Darrin is a punk rock fan all the way.

We have a childhood fascination with Cheap Trick. I have a memory of playing a show with Shawn in 2000, and Darrin was in the audience wearing his Cheap Trick belt buckle. I think this is when we first really connected with Darrin, but it only took 18 years to get him in the band!

We all love classic REM. The funny thing about REM is that their parts and songwriting are deceptively simple. There’s a lot of complicated stuff going on in those songs that we certainly find inspiring.

Currently, Shawn has been listening to classical and I’ve taken a long dive into Jaco Pastorius. I’m sure I’ll come up with another obsession soon enough.

What’s next for The Eyebrows?

We’re growing a regional presence in the SouthEast. I’ve always enjoyed playing other towns and expanding my horizons. We’d love to start playing festivals and bigger events. Putting out this record “the right way” has opened a lot of doors for us – I think now it’s just a matter of looking to see what’s behind door #1, #2, etc.

We’re going to start tracking the next record with Mitch Easter this November – and we’re terribly excited about the new material!